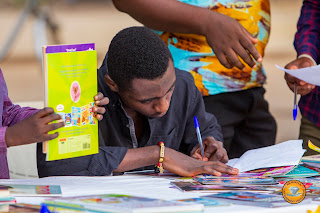 The people of Akwatia in the Denkyembour District of the Eastern Region who love to read or do some research will now give a sigh of relief as a new library complex will soon be established by a group of well meaning citizens of the town with the support of the Akwatiahene,  Osabarima Kofi Boateng III.

The group calling themselves Akwatia Development Association (AkDA) is establishing the library complex as part of programs and projects of its education committee to enhance education in the Akwatia township.

This was revealed during a fund rasing exercise to support the Education Committee in the quest to enhance education in the locality.

The Akwatiahene for his support donated an old building in the township which has not been in used for a while to be rehabilitated by the group for the library.

The library complex after its rehabilitation will be stocked with books donated to the community by  Rainbow Trust Foundation, a Non-Governmental Organization (NGO) working in partnership with Book Aid International.

The Akwatia Development Foundation in December last year held a similar fund raising exercise at the Uiversity of Ghana, Legon.

Speaking at the fund raising ceremony, A former District Chief Executive of the then Kwaebibirem District (now Kwaebibirem Municipal and Denkyembour District), Yaw Boakye – Yiadom advised Ghanaians who can afford to support the less privileged in the society in the education of their awards.

According to the former DCE who served in the erstwhile President Kufuor Administration, the Kufuor administration and the Akufo Addo government have done so well by making both basic and senior high school free. He however added that notwithstanding, there are still some extreme poor parents who cannot afford basic things like lorry fare, additional books and a few other things their wards need to enjoy from the visionary policies of the two administration. He said, meanwhile, there are people from families of these poor parents who have enough to be able to help others and yet do not help them.

He added that there are also students who have passed their WASSCE examination with good grades and are unable to further because of poverty.

Mr. Boakye Yiadom is therefore pleading with people in the society who can afford to support those who cannot afford. Sounding like reiterating President Akufo Addo’s favourite quote; “if a free society cannot help the many who are poor, it cannot save the few who are rich”, Mr. Boakye Yiadom advised that the widening economic gap between the poor and the rich in the country is a recipe for attack on the rich and for that matter the rich should try as much as possible to pull the poor towards them.

Mr. Boakye Yiadom was speaking to the Evening News  on the sidelines of a fund raising lunch organized by the Education Committee of the Akwatia Development Association(AkDA) at the University of Ghana, Legon over the weekend.

Education Committee
The Akwatia Development Association’s Education committee has members such as former Attorney general Marietta Brew Appiah Oppong, Prof. Anning a veterinary scientist at the University of Ghana among other prominent people.

The committee according to the President of AkDA Dr. Joseph Amuzu seeks to raise at least GHC500,000 in the near future to help in educational infrastructure development, scholarship, training for teachers, extra classes for students of Akwatia, establishing of a modern library among others.

How to stay healthy during harmattan

NPA TO COMMENCE REGULATION OF BITUMEN