The New Juaben South Municipal Assembly (NJSMA) on Saturday organized a massive clean-up exercise at the central business area of the Koforidua Municipality.

To ensure that the exercise makes the desired impact, the central business area was zoned and each of the Assembly Members were made coordinator of each of the zones.

Staff of the Municipal Assembly, members of the security services in the municipality, traders and drivers in the central business area in collaboration with the staff of the Zoomlion Waste Management Company were mobilized to participate in the exercise.

Speaking to the Ghana News Agency (GNA), the Municipal Chief Executive, Mr Isaac Appau-Gyesi said the Assembly had planned to make the clean-up exercise a monthly affair on the first Saturday of every month to ensure that the municipality is kept clean. 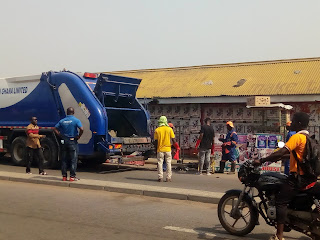 He said earlier last December, a similar exercise was organized in the various electoral areas in the municipality.

Mr Appau-Gyesi said the Assembly had planned to set up a task force to manage waste in the markets and the lorry stations where a large population of the municipality meet daily to transact business.

Mr Kanil Abdullai, Assemblyman for Anglo Town who was Coordinator for All Nation University Area said he had recorded the names and store numbers of some store owners who opened their shops and refuse to participate in the exercise for prosecution.

Islam in ‘Crisis All Over the World’, says France’s Macron

Ken Kuranchie writes: The Vigilante at Work and His Fate to...

Okyenhene Urges Journalists to be Bold and Speak Truth to Power

Needless calls for resignation of Ofori-Atta over Sputnik Vaccines