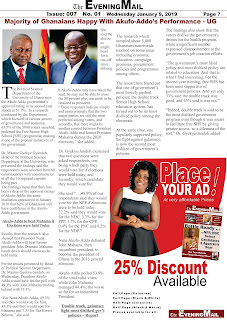 The Political Science Department of the University of Ghana says the Akufo Addo government’s approval rating in its second year stands at 57.7%.  In a research conducted by the Department which focused of various sectors of governance and economy, 63.5% of the 5000 voters sampled, endorsed the Free Senior High School [SHS] programme, making it one of the popular initiatives of the government.

Dr. Maame Gyekye Gyandoh, Head of the Political Science Department at the University, who presented the findings said the respondents were selected from 80 constituencies with constituencies in all the 10 regional capitals being part.
The findings mean that there has been a drop in the approval ratings of Akufo-Addo; the same institution announced in January 2018 that 62% of Ghanaians still have confidence in the Akufo-Addo government.

Akufo-Addo to beat Mahama if Elections were held Today

Per the results presented by Head of Political Science Department, Dr. Maame Gyekye-Jandoh, on Wednesday, President Akufo-Addo would have led the poll with 49.3% with John Mahama trailing behind with 33.3%.

She said the elections might head for a run-off since although Akufo-Addo may have taken the lead, he may not be able to cross the 50 percent plus one mark to be retained as president.
“These responses indicate simply and unsurprisingly that the two major parties are still the most preferred among voters, and secondly, that there might be another contest between President Akufo-Addo and former President Mahama during the 2020 elections,” she added.
Dr. Gyekye-Jandoh explained that two questions were asked respondents, one being which party they would vote for if elections were held today, and secondly, which candidate they would vote for.
She said “….48.9% of our respondents said they would vote for the NPP if elections were to be held today. 32.2% said they would vote for the NDC, 3.3% for the PPP, 1.7% for the CPP, 0.4% for the PNC and 0.2% for the NDP.”
Nana Akufo-Addo defeated John Mahama, then incumbent president, to become the president of Ghana in the 2016 general elections.
Akufo-Addo polled 53.9% of the total valid votes, while John Mahama managed 44.4%, the worse so far for an incumbent President.
Double track, galamsey fight most disliked gov’t policies – Report
The research which sampled about 5,000 Ghanaians nationwide touched on some areas including economy, education, campaign promises, government policies and programmes among others.
The researchers found out that one of government’s most fiercely pushed policies; the double track Senior High School education system, has turned out to be its most disliked policy among the electorate.
At the same time, one popularly supported policy; the fight against galamsey, is now the second most disliked of government’s policies.
The findings also show that the voters dislike the government’s drones for the health program, while a significant number expressed disappointment at the government’s job creation efforts.
“The government’s most liked policy and most disliked policy are related to education. And that is what I find interesting. For the second year running, free SHS has been most supportive of government policies. And yet only 33% said the double track was good, and 45% said it was not.”
“Indeed, double track is said to be the most disliked government program even though it was meant to facilitate free SHS by giving greater access; so a dilemma of the sort,” Dr. Gyekye-Jandoh added.

Hunt for corrupt official 1: Let not noise drown the truth

Shisha is illegal in Ghana – FDA

EU and the USA Bullying Ghana: No, Ghana’s Cocoa is not...

We have overcome ‘dumsor’ – Akufo-Addo