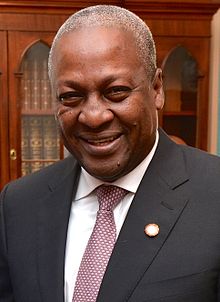 Former President and NDC flagbearer hopeful John Dramani Mahama has begun a five day campaign tour to the Eastern Region in his bid to lead the opposition National Democratic congress into the 2020 general election.
The former president after losing woefully in the 2016 general election is staging a come back to try his shot on the presidency again.
Following his decision to stage a comeback, the former president has been campaigning across the country to solicit for the support of the about 280,000 NDC delegates who shall be voting to elect flagbearer for the party.
The former president was intially scheduled to start his campaign in the Eastern Region on Friday but changed the time table to today Monday, 14th January, 2019.
The former president started his tour to the region at Aburi where he paid a courtesy call on the chief of Aburi, Otoobour Gyan Kwasi at his palace. From Otoobour’s palace, the former president met with the NDC’s delegates in the area where he espoused his reasons for contesting again to them.
The first day’s campaign also took the former president to other places such as Akropong constituency, the three Krobo, Yilo, Upper Manya and Lower Manya constituencies before ending the day’s tour at the Asuogyaman constituency.
The tour which is expected to be continued on Tuesday starting from the Nsawam Adoagyiri Constituency is expected to end at Ofoase-Ayirebi Constituency on Friday.
Meanwhile all MPs, former MMDCEs, former MPs, former Presidential Staffers, former Ambassadors/High Commissioners and National Executive Members who hail from the region have been directed to meet with the former president at their respective constituencies.

The mind is the starting point of success