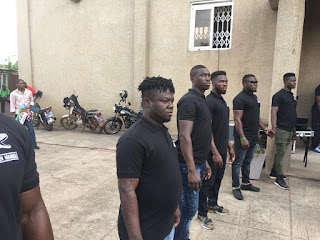 The opposition National Democratic Congress has unveiled another vigilante group in the Eastern Region known as the Eastern Mambas.

Members of the well built bodied men group were first sighted in the region this week as part of the security details of the former president John Dramani Mahama who is currently campaigning in the Eastern Region.

Confirming the existence of the group in the region to the Evening Mail, the regional Organizer of the NDC, Hackman Kabore, said 300 of such well built men are done with their ‘training’ now. “We are hoping to recruit and train up to 1000 before 2020. In 2020, we shall be providing at least three members of Mamba to every polling station in the region.” Mr. Kabore told the Evening News.

He stated that the rationale behind the recruitment of the ‘machomen’ is to make sure the party provides its own security that will protect the ballot boxes in 2020.
Mr. Kabore said experience from the recently held referendum has taught them(NDC) that the Electoral Commission will do everything to rig the election for the NPP, hence the need to protect the various ballot boxes in 2020. “We all witnessed what happened in the referendum. We all saw how the police  were complicit in the illegalities that occurred in the referendum. The EC has given us indication that they are ready to rig the election and it is clear the police will not be there to prevent them, so we need to provide our own security.” He said

Recruited to face NPP
The various groups of machomen currently been trained by the NDC are believed to be trained to face the invisible and the delta forces of the ruling New Patriotic Party.

Asiedu Nketia’s Endorsement
The Eastern Mambas establishment by Hackman Kabore follows Joseph Yamin, the former Ashanti Regional Secretary of the party’s formation of another group known as the hawks.

Though many Ghanaians including civil society organisations have condemned the formation of such vigilante groups, the General Secretary of the party, Johnson Asiedu Nketiah has endorsed their existence.

In an interview with the media, Mr. Nketia said Ghanaians should blame the NPP who first formed groups such as the invincibly and the delta forces. He said the hawks are there to provide security for the party and the party recognizes that existence.

READ MORE:  Participate In The Year Of Return: John Kumah Urges Ghanaians In the Diaspora

Dragons and Lions
Meanwhile report suggests that the NDC has established similar groups known as Dragons, Lions etc in other regions.

It is unclear the reason behind the penchant for the use of names of animals as names of these vigilante groups but many believe that maybe the groups are formed to behave like the animals they have been named after.

In the case of the Eastern Mambas, Mr. Kabore confirmed that the group is as poisonous as the poisonous snake called mamba hence the choice of that name.

Attacks on NDC Members
Jospeh Yammin’s hawks were reported to have physically attacked members of the Joshua Alabi Campaign Team, the Ashanti Regional chairman and regional secretary of the party during the campaign tour of the former president Mahama in the Ashanti region.

Members of the Campaign Team of Joshua Alabi, presidential hopeful of the opposition NDC, accused the Hawks of stalking them.

According to them, the well-built NDC vigilante group have been moving round campaign meeting grounds of the former Vice Chancellor of the University of Professional Studies to harass organisers of the meeting and some members of the party, who are believed to be loyal to Prof Alabi.

One of such incidents was said to have occurred in the Kpone-Katamanso District of the Greater Accra Region in November last year where some members of the Hawks attacked former Member of Parliament (MP) for La Dadekotopon, Nii Amasah Namoale, Victor Kojogah Adawudu and some coordinators of Joshua Alabi Campaign Team after a meeting with delegates.

The Hawks were said to have attempted to physically assault the programme coordinators for failing to pay for security service they had rendered.

When such actions of the hawks were asked how the party will handle Eastern Mambas should they also turn their guns against party members, Mr. Kabore said Alabi’s group’s accusations of the hawks are unfounded and should be disregarded.

He however added that the Eastern Mambas are not there to cause mayhem and the public should therefore not be panicked by their existence. “They are only there to protect the ballot in 2020. Nobody should be afraid of them because they are not there to foment trouble.” He said

Election 2020: Ballot boxes, EC officials yet to arrive at Weija-Gbawe

10 Ways to Make Extra Money as a Graphic Designer

Kwahuhene appointed board chairman of ADB

Here’s why Africans are buying citizenship in the Caribbean island of...