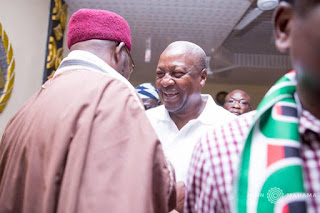 The former President and the opposition National Democratic Congress flagbearer hopeful Mr. John Dramani Mahama has ended his nationwide campaign tour towards getting NDC delegates to endorse him.

The former president declared his intention to contest the presidency again following a humiliating defeat on the hands on the ruling New Patriotic Party’s Nana Addo Dankwa Akufo Addo in the 2016 general elections.

The nationwide campaign tour gave the former president the opportunity to speak on a number of national issues.

The former president as part of the tour spoke on programmes and policies of the Akufo Addo government including policies such as Planting for food and jobs, security, Education with much focus on the Free SHS, the economy among others.

The almost four months campaign tour ended in the Eastern Region, the home region of the current president.

HYPOCRISY KILLING NPP
From the Eastern Region, Evening Mail’s ODIASEMPA KWADWO AGYEI reported that the former President described the Akufo-Addo government as a government of hypocrisy being run by family and friends.

Mr Mahama speaking at Akwatia said during his administration where he appointed Ms. Joyce Bawa Mogtari as a Deputy Minister for transport, the NPP and some Ghanaians lambasted his government.

“Meanwhile  Nana Addo has surrounded his government with brothers, in-laws, nephews and friends and saying they have the skills, obviously shifting the Goal post”  He said.

Speaking to the Evening Mail,  Mr. Prah mentioned that his Communications Team followed Mr. Mahama’s tour throughout the region and saw that the NDC delegates were unimpressed with the sort of message that the former President gave them since he only focused on attacking the impressive programmes of the President  Nana  Akufo Addo without coming out with a single alternative.

“My brother, I believe you are aware that Former President John Mahama is a “Pasco”, he is “History”, in fact, he has lost touch with the people of Ghana” Mr. Prah said.

He stated that Mr. Mahama is as “unattractive” to Ghanaians as his “Campaign Message”.

Kwahuhene appointed board chairman of ADB