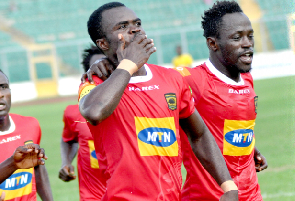 Asante Kotoko S/C coasted home to a 2-1 victory over visiting Coton Sport F/C of Garoua in their second leg CAF Confederations Cup clash at the Baba Yara Stadium, Kumasi, on Sunday, to sail through to the Group Stage of the competition.

The Ghanaian giants accounted for the Cameroonians 3-2 in the first leg, thus qualifying on a 5-3 goal aggregate, a feat they have not achieved for more than a decade.

The two-time African champions, playing in-front of their teeming supporters, launched an onslaught against their opponents after Cape Verdean referee, Fabricio Duarte, signalled for the commencement of proceedings.

Relying on the hardworking midfield duo, Kwame Bonsu and Richard Senanu, Kotoko pinned the visitors to their own half, having seized the centre of the pitch in a well-rehearsed fashion.

Coton Sport’s skipper, Kamilou Daouda, and Ndongo Foe, who anchored the visitors’ defensive network, struggled to contain the incessant pressure from the Porcupine Warriors, and would concede a penalty three minutes into injury time of the first half.

This was after Kotoko’s Burkinabe import, Sogne Yacouba, was fouled in the vital area for a penalty, which saw skipper Amos Frimpong converting the spot-kick to put the Porcupine Warriors ahead.

The homers commenced the second half still probing for more goals, which did come in the 53rd minute courtesy Maxwell Baako.

The striker, combining effectively with Emmanuel Gyamfi and Yacouba upfront, would surprise Coton Sport’s goalie, Bassa Djeri with a teasing shot which found the back of the net.

The visitors stepped up their game in the closing stages of the match and would strike a consolation goal five minutes to time through Oumarou Sanda Marou.

The victory also secured Kotoko a place in the CAF Confederation Cup group stages for the first time since 2008.

Kotoko have thus achieved their target of reaching the money zone for the for the first time in 11 years.

They were finalists in the maiden edition of the competition in 2004, losing the title to fierce rivals Hearts of Oak.

Sports pundits have suggested that the performance of Kotoko in this years game is likely to give Ghana back its previous four in the continental games- two in the champions league and two in the confederation cup.

International spectators will be refused entry into Japan for Tokyo 2020