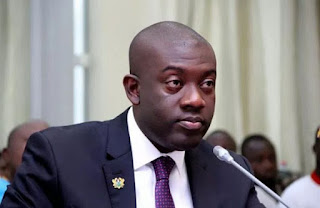 Government is concerned with the growing spate of fake news in Ghana and is calling for a concerted national effort to tackle this menace head-on as it has the potential to undermine press freedom and the country’s democratic dispensation.

According to Minister for Information, Mr Kojo Oppong Nkrumah, “fake news continues to be a major debacle creeping into the media space particularly in a time where any news can go viral and mislead consumers.”

Mr. Oppong Nkrumah expressed his worry in a meeting with the national executive of the Ghana Journalists Association (GJA) in his office.

He said “fake news continues to be a major creeping challenge into main stream media. It has even gotten to the extent that main stream media houses are publishing some of the stories that have been flying on fake media platforms.”

“It is now a debacle we must begin to confront especially in an era where people now begin to do fake videos. So it is important for stakeholders to confront the issue to identify it and tackle it because our mutual existence as professionals in the media space is threatened by the existence of fake news, he noted.

“We may not be in a situation where fake news is alarming today but we must confront it now.” he added.

The executive of GJA, led by the President, Mr Affail Monney, was with the minister to congratulate him on his appointment as the substantive Minister of Information, and to formally invite him to the celebration of the association’s 70th anniversary this year.

Safety of Journalist
The meeting was also used to reflect on the recent murder of Ahmed Hussein-Suale, a team member of the Tiger Eye PI, last Wednesday.

The minister said his outfit had already been working with the GJA on developing what he termed “a national coordinating mechanism on the safety of journalists.”

READ MORE:  We're tired of 'dictator' Museveni, we want you as President – Ugandan to Akufo-Addo

The initiative, he said would be completed in the first quarter of the year and “would allow the government, GJA, security agencies and civil society organisations to exchange information for our mutual benefit.”

Challenges
The minster expressed worry that though the GJA had been at the forefront in the fight to promote democratic rule in Ghana, many reporters are still not members of the association, a situation which he admits is challenging to the growth of the GJA.

He, expressed the government’s readiness to support the GJA to address some of the numerous challenges facing it in order to make it more attractive to every journalist to join it just like other recognised professions.

“Specifically this year, the government, among other things, will want to assist in capacity enhancement of media practitioners to allow journalists to improve on their capacity and address major pitfalls in the media landscape.

“We have already engaged with the GJA, Ghana Institute of Journalism (GIJ), the National Media Commission (NMC) to develop the programme prior to the end of the first half of 2019 and it will provide scholarships for practising journalists to deepen their capacity in their fields of operation,” he added.

For his part, Mr Monney said the killing of the Tiger Eye PI journalist was an attack on all journalists in Ghana and urged the government to ensure speedy investigation into the matter.

President Akufo-Addo: We want to vaccinate everybody against Covid-19

Bawumia: Taking vaccine is for our collective interest

E/R: Demand for local rice surge ahead of Christmas

What does shortness of breath feel like? Doctors explain this coronavirus...

Martin Amidu was drawing salary from the Presidency – Inusah Fuseini

Nana B expresses worry about recent deaths in NPP

President Akufo-Addo: We want to vaccinate everybody against Covid-19

Bawumia: Taking vaccine is for our collective interest