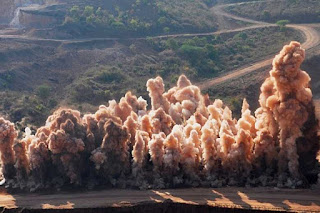 Police personnel have been deployed to a mining site in the Upper East Region after an explosion claimed the lives of 15 people and injured others at Talensi.

The accident is said to have happened early Wednesday morning close to a Shaanxi Mining Company concession.

The District Chief Executive of Talensi, Dr Christopher Boatbil confirmed the deaths after checks at a couple of hospitals.

“It was confirmed that six people had died. Now we went to Shaanxi, came back and I went back to see the update from the authorities at the regional hospital and I was told as the time, five other people had passed on.”

“I then set off to my office only to be called by the hospital administrator to tell me that one of the people who was on oxygen had also passed on and two bodies had been brought from the field making it 15,” the DCE recounted.

In the meantime, Dr. Boatbil said the assembly was focused on identifying the victims of the explosion.

“What I told the workers of the two facilities was to ensure that we get the identity of the victims because we wanted to know whether the people who have suffered this calamity are workers of Shaanxi Mining Company or are illegal miners or other groups of people that may have gone into the pit.”

“Other people that we suspect might also involved will also be invited by the police station to answer some questions,” he added.

The mining company has refuted speculation that the explosion occurred on its concession.

Public Relations officer of the Shaanxi Mine, Maxwell Wooma “all these matters that have been reported are all actually matters that occurred outside the mining area Shaanxi Mining Ghana Limited.”

He explained that the speculation may have been because an illegal miner had also tried to steal ore from their concession before the explosion.

The miner was involved in an accident in his attempt to escape from the Shaanxi Mining concession.

“We subsequently reported it to the police at our side here and released our ambulance for them to take this illegal intruder to the regional hospital for treatment,” Maxwell Wooma said.

Shaanxi Mining Ghana Limited had its licences suspended in 2017  for investigations into the company’s underground operations and the alleged death of about seven miners in the area.

It was eventually allowed to commence operations on August 28, 2017, after a three-month suspension because the company had improved safety standards.

Meanhwile the Mining Company has been ordered to halt its operations at Gbane following the death of at least 15 persons in an explosion that is said to have happened close to the Chinese-owned company.

The directive came in a statement from the Minerals Commission in response to the Wednesday morning incident.

“Management of Shaanxi Mining Company Limited is directed to suspend all mining operations at Gbane with immediate effect until further notice pending investigations into the tragic incident that occurred today [Wednesday],” a letter from the Minerals Commission said.

The mining company has said it will obey the directive as it expects investigators to begin work on Thursday.

Authorities are yet to provide some clarity on the incident and what caused the deaths.

License Suspended
The Shaanxi Mining Ghana Limited had its licences suspended in 2017 over safety concerns following a similar incident.

That followed the death of seven miners at the company’s underground operations.

Shaanxi Mining was eventually allowed to commence operations on August 28, 2017, after a three-month suspension because the company had improved safety standards.

US Visa Free for Ghanaians story not true-US Embassy

Akufo-Addo is the only person who can sack me as a...

Christians urged to live as children of light

Amazon fire: jaguars fishing in the sea to survive