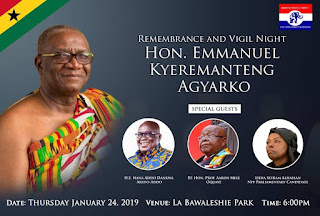 The ruling New Patriotic Party will on the evening of Thursday, January 24, 2019, hold a candlelight vigil to honour the memory of the late Member of Parliament for the Ayawaso West Wuogon Constituency, Hon. Emmanuel Kyeremateng Agyarko.

The vigil is ahead of the burial and final funeral rites of the late MP on Saturday, July 26, 2019.

In a statement signed by the party’s National Organiser Sammi Awuku, the vigil is expected to be attended by the President Nana Addo Dankwa Akufo-Addo as the Guest of Honour.

Also in attendance, shall include the Speaker of Parliament, the party’s parliamentary candidate for the impending bye-election in the constituency, National Officers of the party, Ministers of State, Members of Parliament, MMDCEs and other government appointees as well as scores of party loyalists.

READ MORE:  NPP MP HAILS JOSPONG, CALLS HIM CAPTAIN OF THE ENVIRONMENTAL SANITATION INDUSTRY AND URGED LEADERS TO SUPPORT HIM

According to Sammi Awuku attendees are expected to be in either red or black apparel for the occasion.

The converging point is the Bawaleshie park at 6pm on Thursday.

Minority to Call for Bi-Partisan Probe into Menzgold

Joe Ghartey, OTHERS top NPP poll for who goes after Nana...

Info Minister: GBC has not been asked to shut down channels

SONA 19 Update: Basic Education to Be Restructured to Include SHS