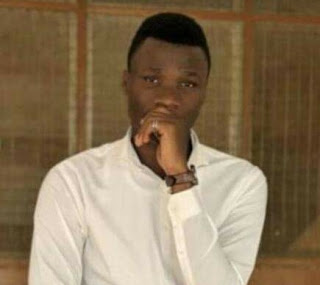 A final year BSC in Development Planning student of the University for Development Studies (UDS), Wa Campus,  Enoch Akondor popularly known as C.K, has committed suicide at Wa in the Upper West Region.

The unfortunate incidence happened in the early hours of Saturday, 26th of January 2019.

Though media reports had suggested that relationship issues could have been the cause of his suicide whilst others put it on academic ups and downs, our sources has revealed that the real reason for his suicide is still unknown since CK did not leave any notes or traces as to the reason for the unfortunate death.

According to some students who spoke with the Evening Mail, CK on the night of his death was heard talking about his preparation to register his courses on Monday in order to avert paying penalty.

Report says he was later seen busily talking on phone before going to bed.

According to his friends, CK who normally wakes up early in the morning in his hostel was not seen outside and upon several knocks on his door, no response was heard forcing the students to call on a carpenter to forcefully open the door  where his lifeless body was seen with a lot of foam around his mouth and a bottle of a substance suspected to be a poison seen beside him.

Dean’s Comment
When the Evening Mail contacted Prof. Derbile, Dean of Faculty of Planning and Land Management, he confirmed the death og CK. He however added that the school cannot confirm whether it was suicide or not. He stated that the school has handed over the case to the police and hoping that the real cause of the death will be revealed after the police investigation.

Rubbish of Exams Failure
Meanwhile Evening Mail’s sources within Mr. Akondor’s department has rubbished the poor performance claim by some media houses. According to our sources, the results for the semester has even not been released and it will be weird for anybody to commit suicide over examination results that have not been released yet.

GHANAIANS IN US SING PRAISE OF AKUFO-ADDO