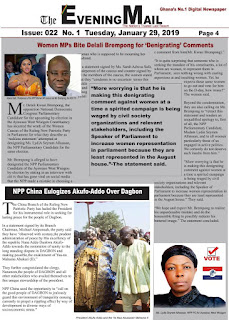 Mr. Brempong is alleged to have denigrated the NPP Parliamentary Candidate of the Ayawaso West Wuogon by-election by stating in an interview with citi tv that has gone viral on social media that the NPP made a mistake in choosing a woman who is supposed to be mourning her husband.

READ MORE:  Tap and Pay with your Visa contactless card for a seamless and secure experience

In a statement signed by Ms. Sarah Adwoa Safo, chairperson of the caucus and counter signed by all the members of the caucus, the women stated that they “condemn in no uncertain  terms this reckless and misogynistic comment from him(Mr. Kwasi Brempong).”

“It is quite surprising that someone who is seeking the mandate of his constituents, a lot of whom are women, to represent them in Parliament,  sees nothing wrong with casting aspersions at and insulting women. Yet, he expects these same women to go out and vote for him on the D-day, how ironic!” The women said.

Beyond the condemnation, they are also calling on Mr. Brempong to “retract this statement and renders an unqualified apology to, first of all, the NPP Parliamentary Candidate, Madam Lydia Seyram Alhassan, and to all women particularly those of us engaged in active politics. We certainly do not deserve such insults from him.”

“More worrying is that he is making this denigrating comment against women at a time a spirited campaign is being waged by civil society organizations and relevant stakeholders, including the Speaker of Parliament to increase women representation in parliament because they are least represented in the August house.” They said.

“We hope and expect Mr. Brempong to realize his unpardonable mistake and do the honourable thing to possibly redeem his battered image.” The statement concluded.