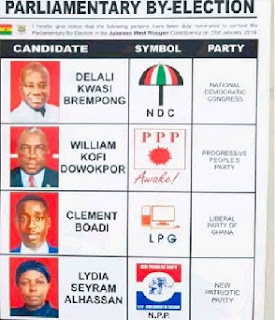 All is set for the Ayawaso By-Election slated for Thursday 31st January, 2019.

In all close to 90,000 electorates are expected to vote in the election.

The election is expected to begin at exactly 7:am at all polling stations and end at exactly 5:00pm.

According to the Electoral Commission, all materials and personnel are set for the election.

By the time Evening Mail visited the constituency on Wednesday, electoral officials were busy putting up final touches to their activities.

In the 2016 general elections, the voter turn out for the parliamentary election in the country generally was 64%.

Ayawaso West Wuogon
Two of the candidates who contested in the 2016 General elections are again putting up themselves for the by-election. They are NDC’s DELALI KWASI BREMPONG and the PPP’s WILLIAM DOWOKPOR.
In all, four political parties are vying for the vacant seat.

Cancel by-election
Some politicians have suggested cancellation of by-elections in the country.
Mr. Ras Mubarak had suggested to the NDC not to have put up a candidate for the Ayawasoby-election. According to the NDC Member of Parliament for Kumbungu constituency in the Northern Region, “we should have an agreement amongst ourselves that if a sitting MP dies, the party from which he was an MP should select a candidate to serve his remaining term.”

Mr. John Boadu, the General Secretary of the ruling NPP had also stated that by-elections are waste on the country’s limited resources and discussion towards its cancellation should be considered.

READ MORE:  Gov’t to improve social protection interventions towards rights of the child

NDC’s Allegation
The NDC has however, raised concerns about the electoral register of the Ayawaso West Wuogon constituency ahead of the January 31 by-elections.

According to the party, they made a request to the Electoral Commission to be furnished with the electoral register which was done.

However, at their observation during the bagging of materials for the by-elections they noticed the number of voters at each polling station has been increased.

They want the EC to furnish them with the 2016 electoral roll.

They accused the EC of conniving with the ruling NPP to rig the election.

EC Response
The Electoral Commission (EC) has however described as untrue, allegations by the National Democratic Congress (NDC) that the Commission has bloated the voters’ register for the Ayawaso West Wuogon by-election.

According to the Commission, the said register is a combination of the voters list, transfer list and proxy list which were contained in separate lists in 2016, hence the increase in numbers.

A statement issued on Wednesday and signed by the Deputy Chairperson in charge of Corporate Services, Dr. Bossman Asare, also denied claims by the party that its attempts to access the proxy list, transfer list and special voters list have yielded no results.

Observation
The Coalition of Domestic Election Observers (CODEO) will be observing the Ayawaso West Wuogon Constituency by-election to be conducted by the Electoral Commission of Ghana on Thursday, January 31, 2019.

According to the National Coordinator, CODEO, Albert Arhin, the organisation is deploying a total of thirty (30) observers who will undertake roaming observation or randomly selected polling stations across the various electoral areas in the constituency.

How to survive all your friends’ weddings when you’re single