House and Senate negotiators on Monday night agreed in principle to provide $1.375 billion for fencing and other physical barriers at the Mexican border, part of a broader agreement that would stave off another partial government shutdown without funding President Trump’s wall.

The agreement would allow for 55 miles of new bollard fencing, with some restrictions on location based on community and environmental concerns, according to two congressional aides, who requested anonymity to disclose details of the private negotiations. That is a fraction of the more than 200 miles of steel-and-concrete wall that Mr. Trump demanded — and 10 miles less than negotiators agreed on last summer, before Democrats took control of the House.

The deal, which must still pass the House and the Senate, and secure Mr. Trump’s signature, came together just before Mr. Trump, framed by banners emblazoned with “Finish the Wall” at an event in El Paso, doubled down on his demands.

“We’re building the wall anyway,” he told the crowd, saying that aides had told him that the negotiators had made progress.

The funding for 55 miles of new fencing is a figure far lower than the $5.7 billion that Mr. Trump had demanded and marginally less than the $1.6 billion for 65 miles of pedestrian fencing in the bill that the Senate Appropriations Committee had passed last year.

In December, the president, concerned about reneging on his signature campaign promise, refused to sign onto that legislation, forcing the nation’s longest government shutdown.

The negotiators also agreed to reduce the number of migrants and undocumented immigrants who can be held in detention. Democrats’ demand for a limit on how much detention space could be used for unauthorized immigrants arrested within the United States had threatened to derail the negotiations over the weekend, but lawmakers agreed to waive the demand.

Instead, lawmakers agreed to adhere to levels, set by a number of detention beds, established in the previous budget. That would fund 40,520 beds, a decrease of about 17 percent from current levels, which Immigration and Customs Enforcement reached in recent months only by surpassing its funding caps.

READ MORE:  Airbus scandal: Why Ghanaian bribe-takers were not named by UK investigators

Beyond the border barriers, the agreement, which primarily funds the Department of Homeland Security, would provide $1.7 billion more for border security, including technology at ports of entry, more officers and humanitarian aid.

The Republican and Democratic leaders of the House and Senate Appropriations Committees announced the agreement, which includes seven unfinished spending bills, after three private meetings on Monday. Disaster relief for areas affected by storms and natural disasters last year will not be included, and lawmakers said they would address it separately.

It is expected to be finalized as early as Tuesday, well before the Friday deadline when funding would again lapse for a number of federal agencies. With fears of another damaging shutdown, lawmakers seemed confident that they had the support of party leadership and that Mr. Trump would be willing to sign the agreement.

“We think so,” Senator Richard C. Shelby, Republican of Alabama and the chairman of the Senate Appropriations Committee, told reporters when asked about the likelihood of the president’s signature. “We hope so.”

“The specter of another government shutdown this close, I thought tonight we didn’t want that to happen,” he added later.

Senator Mitch McConnell, Republican of Kentucky and the majority leader, had urged him to “get it done” in negotiations, Mr. Shelby said. Representative Nita M. Lowey, Democrat of New York and the chairwoman of the House Appropriations Committee, said she had been in close communication with Speaker Nancy Pelosi of California and expected her support.

The Otay Mesa Detention Center in San Diego. There are about 49,000 detention beds in all.CreditLucy Nicholson/Reuters 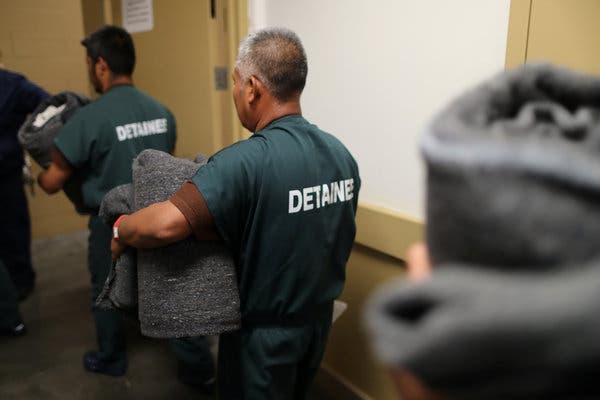 “She has confidence that I made the right decision,” Ms. Lowey told reporters.

White House officials did not respond to requests for comment about the terms of the agreement, and the president’s conservative allies on Monday night were already denouncing the deal. Sean Hannity, a Fox News commentator and a confidant of the president’s, called it “a garbage compromise.”

Pentagon officials spent the weekend readying for the possibility that Mr. Trump would declare a national emergency, something that his allies said he is still considering as a means to secure border wall funding.

But Republican lawmakers remained optimistic that their agreement would hold.

“This has been a difficult one,” said Representative Kay Granger of Texas, the ranking Republican on the House Appropriations Committee. “I think everyone will say, ‘Good work.’”

A specific point of contention had been the number of detention beds under the control of ICE, which had stalled talks over the weekend.

House Democrats, urged on by immigration rights groups, had pushed hard, hoping to leverage White House fears of another damaging shutdown into a softening of the president’s hard-line immigration policies that they say have torn apart families, wrenched productive workers from the communities they have lived in for years and infused a heartlessness into official American immigration policy.

The Democrats’ goal was to cut the overall number of detention beds, including those occupied by asylum seekers and people caught at the border, from its current level of around 49,000 to 34,000, the number funded during the Obama administration, Democratic aides said. That, they say, would end sweeps and roundups, and force ICE to focus on pursuing hardened criminals.

“We started at zero on the wall, and we compromised a lot after that, and we are now asking them to change, too,” said Representative Lucille Roybal-Allard, Democrat of California and a member of the 17-member House and Senate conference committee tasked with hammering out a compromise.

Mr. Trump caught on. When Mr. Shelby presented him with the Democrats’ demand, he rejected it quickly, according to two people briefed on the exchange.

“These are the people coming into our country that we are holding and we don’t want in our country,” the president told reporters at the White House on Monday. “That’s why they don’t want to give us what we call ‘the beds.’ It’s much more complicated than beds, but we call them ‘the beds.’”

In private, Republicans responded with a plan that would exempt many detained immigrants from the cap, including those people either charged with or convicted of crimes, including misdemeanor drug offenses and violent felonies. That, in turn, was rejected by Democrats.

“You have ICE agents picking up mothers and fathers and children in their own neighborhoods. That’s why the beds issue is so much more important than the wall,” said Ms. Roybal-Allard, whose Los Angeles-area district is 85 percent Hispanic, the highest percentage of any district in the country.

The number of beds occupied by detainees fluctuates over time, influenced by a variety of factors, including ICE enforcement policies and the flow of migrants at the border with Mexico. The rate of that flow is unpredictable and determined by factors such as the performance of the economies north and south of the border, crime, gang activity and the business practices of coyotes paid to transport migrants from Mexico and Central America to California and the Southwest.

The number of monthly apprehensions of migrants at the border has averaged 25,000 to 40,000 for most of the past decade, but has risen to about 50,000 over the past several months, according to statistics compiled by the Department of Homeland Security.

If ICE does not have enough room to place individuals and family members they detain, they must loosen their enforcement actions, creating a powerful motive for new migrants to enter the country illegally, Trump administration officials say.

“You cannot have border security, without strong interior enforcement, whether there is a wall there or not,” said Matt Albence, the deputy director of ICE, on Monday in a conference call with reporters.

“This is a poison pill that no administration, not this one, not the previous one, should ever accept,” Mr. McConnell said on the Senate floor. “Imagine the absurdity of this: House Democrats want to set a limit on how many criminal aliens our government can detain.”

Energy: Kasoa and environs to experience temporary power outages from May...

All set for markets fumigation in Eastern Region today

Profile of Samuel A. Jinapor