Odekro, a local Parliamentary Monitoring Organization that has specialised in monitoring and reporting activities that go on at Ghana’s Parliament has described as a “ruse to protect future recalcitrant MPs” the tap at the butt punishment meted to Member of Parliament for Assin Central, Mr. Kennedy Agyapong.

Parliament on Thursday afternoon reprimanded Assin Central MP, Kennedy Agyapong after he was found guilty by the Privileges Committee for calling the House cheap and useless.

Before proceeding to reprimand him, Speaker Mike Aaron Ocquaye said he should live up to expectation and not let his colleagues down again.

“I agree that if this House should come to the conclusion that indeed the member should go and sin no more, we will not have the opportunity to have this same matter revisited in one form or the other in the annals of the history of this house whether from him or whoever else,” the Speaker said.

When given the opportunity to apologise, Mr Agyapong said some of the things he is purported to have said were misconstrued.

Although he expressed remorse for calling Parliament cheap, he was insistent that he never said the House was useless.

“I plead with the House to remove the word ‘Parliament is useless’ because I never said that…today and tomorrow I will insist I never used the word,” he said.

Minority Chief Whip, Muntaka Mubarak petitioned Parliament last year for action to be taken against Mr. Agyapong for allegedly describing the House as useless in a TV interview, a charge the MP denies.

But according to Odekro it is “shocked by the outstanding powerlessness of parliament to gravely sanction Hon. Kennedy Agyapong, a serial violator of the 1992 constitution of Ghana, standing orders of the house and MPs code of conduct.”

In a tweet, Odekro said “we believe that letting Kennedy Ohene Agyapong (MP, Assin Central) off the hook for insulting the Parliament of #Ghana will embolden other reculcitrant MPs to misconduct themselves in public.”

“Not for anything that the House can self-check, MPs should be brought to order.” the tweet said.

Below is the statement from Odekro 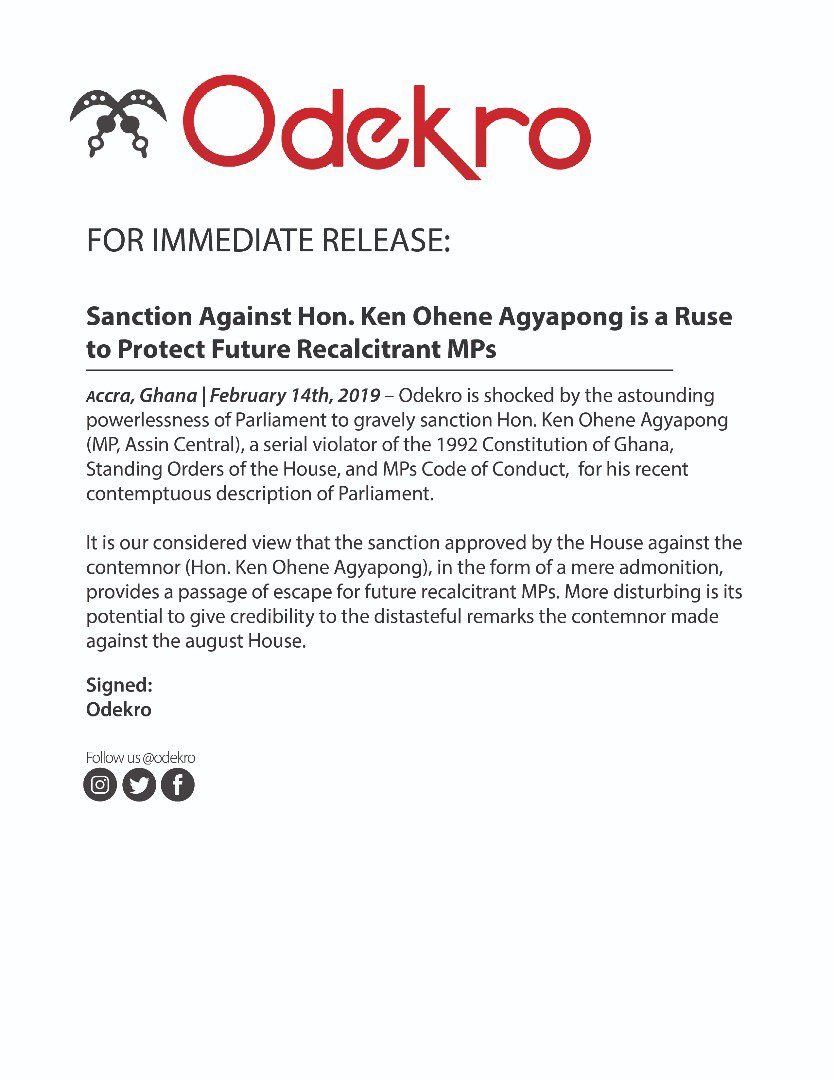 D.K Poison to receive fight purse after over four decades

Asuom SHS to be connected to Solar Energy