One of the complaints that’s been heard about the week-long postponement of Nigeria’s presidential election is that many will have to make the expensive journey to where they’re registered to vote for a second time.

One Nigerian activist, who’s aligned to the opposition People’s Democratic Party (PDP), has been trying to deal with this by organising a free bus service.

But it hasn’t been as successful as hoped.

Using the hashtag #busesfordemocracy Reno Omokri set up routes from the commercial hub Lagos and the capital city, Abuja, to Kano in the north and Enugu in the south-east.

Several people have said that Mr Omokri was only interested in moving PDP voters around the country, but he has denied this.

The BBC’s Bola Mosuro was at the place in Abuja where the buses were supposed to be leaving and has said that only one bus, going to Enugu, had been confirmed and that it had about a dozen passengers on board when it left.

One of the organisers, Elijah Aleje, told the BBC that he was disappointed with the take up. One of the problems was that the pick up point was hard to reach by public transport. 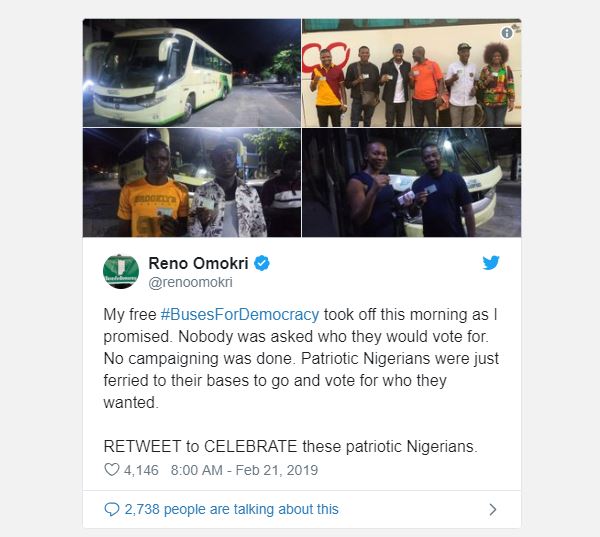 Rousing Welcome For Nana in G/A