In a tweet reacting to the address, Mr Rawlings expressed the hope that the opposition National Democratic Congress (NDC) and the ruling New Patriotic Party (NPP) will join forces to disband political vigilantism which was on the increase.

“I do hope the NDC … and the NPP … will heed the call to join forces in combating the scourge of party militias and violent vigilantism,” Mr Rawlings tweeted.

President @NAkufoAddo's #SONA2019 was disarming. I do hope the NDC @OfficialNDCGh and the NPP @NPP_GH will heed the call to join forces in combating the scourge of party militias and violent vigilantism.

President Akufo-Addo delivering the 2019 State of the Nation Address (SONA) Thursday morning called on the leadership of the two leading political parties – NDC and NPP – to help find a lasting solution to the menace of political vigilantism in Ghana.

According to the president, citizens and future generations would not forgive the current leaders, if they sit aloof for the country’s peace to be undermined by politically related violence.

He said he has personally asked the leadership of the NPP to write to the NDC so that they could together plan a meeting, possibly, next week to find ways to end the increasing threats of political vigilantism in Ghana.

He said failure of the leadership of the two major political parties to end political-related violence as a result of vigilantism will compel him to initiate a Legislative Instrument to end the practice himself.

“The time has come for us to put to end political-related violence,” he said, adding that “Our children and grandchildren will not forgive us” if the country’s peace and security is undermined. 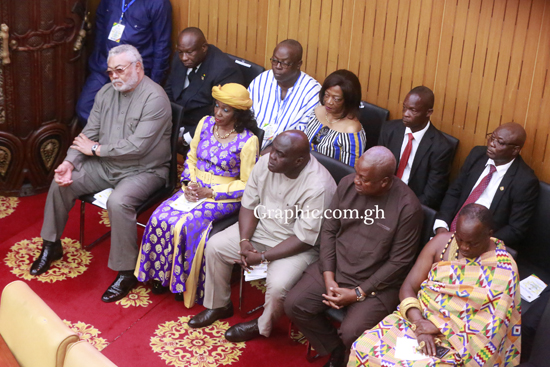 Former President Rawlings (L) with his wife Nana Konadu Agyemang Rawlings, former Chief of Staff Julius Debrah, former President John Mahama and the Chairman of the Council of State, Nana Otuo Siriboe at the chamber of Parliament on Thursday morning during the SONA. Pictures by SAMUEL TEI ADANO and EMMANUEL ASAMOAH ADDAI.

Utah Jazz to be sold for $1.6 billion

Obofour speaks after Ken Agyapong criticised him for flaunting cars and...

Akufo-Addo is the only person who can sack me as a...