President Nana Akufo-Addo is happy over Parliament’s decision to suspend the building of a new parliamentary chamber complex.

This comes after the massive pressure from Ghanaians for Parliament to boycott the decision.

Some groups had even planned to stage a demonstration to express their displeasure over the decision.

Speaking on the issue for the first time when he addressed the Ghanaian community in France, President Akufo-Addo said he is happy the project had been put on hold.

“I am happy to announce to you that, the latest controversy in Accra has also been brought to a conclusion. This is just about the decision by the Speaker of Parliament to build a new Parliament. I hear that the Parliament’s PRO announced that [plans for the parliamentary chamber] has been suspended. So there it is.”

A statement from Parliament on Monday said that its board, after reviewing presentations made to it by well-meaning Ghanaians, has accordingly taken the development “out of its present agenda.”

It however left open the possibility of Parliament returning to the proposed project which it says will “serve the purpose of Parliament.”

“The development of the Parliamentary enclave and a new chamber block and offices shall, however, remain an essential and integral part of the future plans of the Legislature in a bid to provide a strong, accountable, responsive and transparent Parliament to serve the purpose of Parliament.”

The decision to construct the chamber complex has been widely criticized by Ghanaians.

READ MORE:  No Sexuality Education Under my Watch-Nana

Some groups had threatened to stage a protest against the planned construction of the chamber.

The civil opposition to the project also accompanied criticism from legislators from both sides of Parliament. 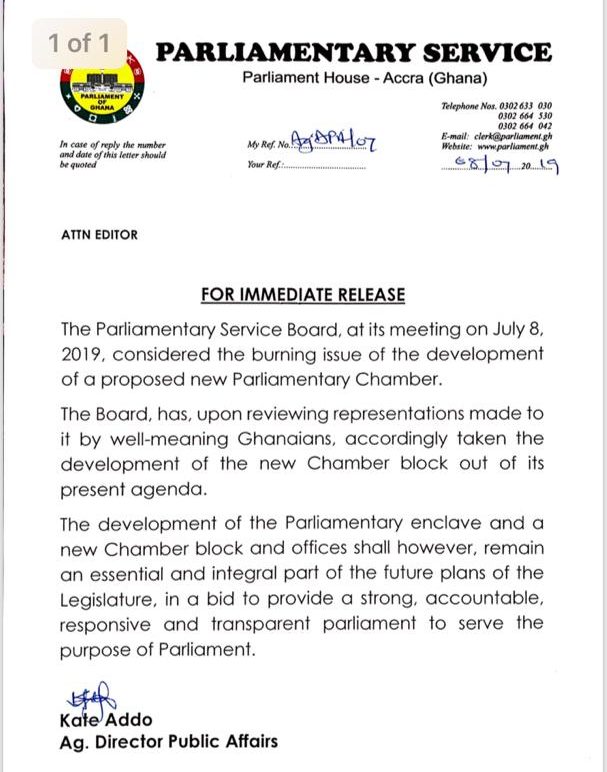 The Minister for Parliamentary Affairs and Majority Leader, Osei Kyei-Mensah-Bonsu had assured that the interest of the public will be considered in the final determination of the project.

He said the plans for the construction had not been finalised and were set for debate in Parliament.

But there have been contradictory signals from the arms of government on the project.

The President was scheduled to attend the sod cutting of the project in June according to a letter sighted by Citi News.

The letter signed by the Speaker of Parliament, Prof. Aaron Michael Oquaye indicated that the ceremony was to be done in the last week of June 2019, subject to the President’s convenience and confirmation.

The construction of a new parliamentary chamber complex was expected to begin before the end of 2019.

Creative decorating with houseplants, from floor to ceiling