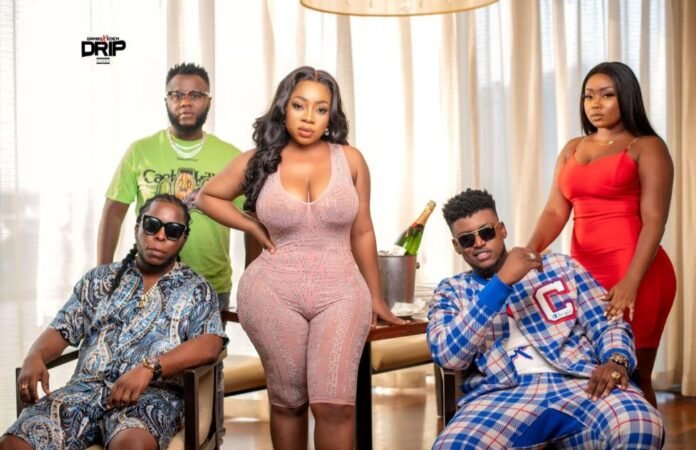 Talented Ghanaian trap rapper, songwriter and singer, Bashir Annan, popularly known in showbiz as Gambo, has dropped the best music video in Ghana so far for 2021.

‘Drip’ was premiered at 4syte TV premises in Accra on Friday, February 26, 2021 and is well positioned to take the Ghanaian music industry by storm.

The premiere attracted several A-list artists, with live performances from Kechi and others.

Speaking to journalists on the sidelines of the premiering of the video, Gambo intimated that “the main concept behind the song is to help people dress” neatly by following new trends going on in the fashion world.

He says his fans should expect bigger projects from him in the near future, urging them to ‘Drip’ all the time.

‘Drip’ is the first song off Gambo’s yet-to-be released Extended Play (EP). The banger is available on all major streaming platforms including YouTube, Audiomack.

Moesha and Edem were both in attendance at the premiere, which saw music lovers thrilled to great songs and performances from Gambo himself and other artists who came to support him.

‘Drip’ official video was shot on the seventh floor of the leading hotel in Ghana, Kempinski Hotel, Accra.

Watch the official video for ‘Drip’ Below

On February 5, 2020, he debuted on the music scene in Ghana with his hit single “Kwacha”.

The single “Kwacha” in which Gambo featured a brand new Lamborghini, seeks to inspire the youth to live happily and not stress themselves about the worries of life.

Gambo has always maintained that he is into music to contribute positively to the growth of the Ghanaian music industry.

He has revealed in the past that his intention is to support upcoming musicians in Ghana through his music label named BlackmobGH.

Despite his wealthy background, Gambo remains one of the humble and soft spoken artists in Ghana.

Gambo was born in Ghana but left to Guyana at an early age of five years but returned to Ghana at the age of 11 to continue his basic education at SAPS and completed in the year 2012.

He continued to Legon Presbyterian Boys, where his music passion was ignited.

The young and energetic Gambo is the only Ghanaian artiste ranked in the top 5 upcoming African Acts in Spark Magazine with his song featuring Fortune Dane and Legacy, “Aye Aye.”

In 2015, Gambo enrolled in the University of Ghana, Legon, where he studied Public Administration for 2 years and graduated with a diploma certificate and went ahead to pursue his degree.

Gambo is a well known entrepreneur and CEO of BlackMob.

Blackmob is an organization setup to give the youth a platform to exhibit their talents, be it modeling, studio work, rapping or anything entertainment across Ghana, Tanzania, U.S.A and worldwide.

Aside Sarkodie I’m the best rapper in Ghana – Says Gambo

PARTY DELEGATES URGED TO ‘CONSIDER THEIR CONSCIENCE, NOT POCKET’ WHEN CHOOSING...

She Married the Priest