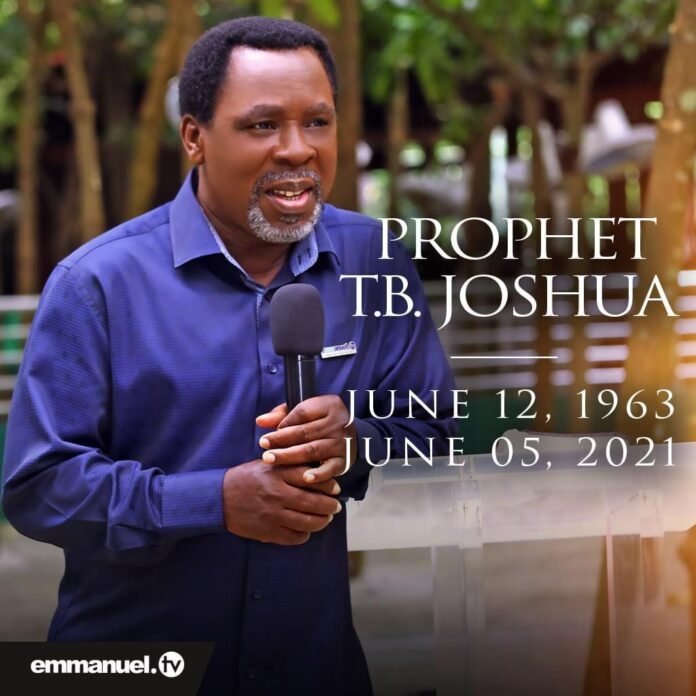 A popular Nigerian televangelist, TB Joshua, has passed on according to reports. He is said to have died on Saturday June 5, 2021 following two months of stroke attack.

TB Joshua died at age 57, exactly a week to his 58th birthday, which he had spoken of in great anticipation of the celebration by way of prayer, fasting and remembrance of the needy.

An official statement from his church, the Synagogue Church of All Nations (SCOAN), said Mr Joshua spent his last days in the service of God and left behind a legacy of service and sacrifice to God’s kingdom.

Close sources say he died not long after he had finished a programme at his church in Lagos.

The Church in its statement via their official social media handles, said, “God has taken His servant Prophet TB Joshua home – as it should be by divine will. His last moments on earth were spent in the service of God. This is what he was born for, lived for and died for… Prophet TB Joshua leaves a legacy of service and sacrifice to God’s Kingdom that is living for generations yet unborn.”

TB Joshua’s ministry was globally recognized through his television platform, Emmanuel TV, run by the church as one of Nigeria’s biggest Christian broadcast stations available worldwide on digital and

In 2014, his church was at the centre of a multi-national investigation after a section of his church headquarters in Lagos collapsed, leaving dozens killed and many more injured.

Mr Joshua denied allegations of negligence, and a trial over the incident was still underway prior to his demise.

Prior to that incident in Nigeria, one of his churches in Ghana’s capital, Accra, collapsed in 2013, leaving four people dead.

He sharply divided opinions in his country and across the globe as some questioned the genuineness of his prophetic Ministry whereas others praised and revered him.

For decades, he continued to minister healing and deliverance in his church, attracting many people from different parts of the world, including presidents and celebrities.

In April, YouTube suspended his account due to allegations of hate speech after a rights body filed a complaint over videos showing the preacher conducting prayers to “cure” gay people.

Facebook also removed at least one post showing a woman being slapped while TB Joshua said he was casting out a “demonic spirit”.

AfCFTA Sec. General Arrives in the Ivorian Capital of Abidjan For a 4-day working Visit

I spent GH¢300,000 to campaign in parliamentary primaries – Xavier Sosu