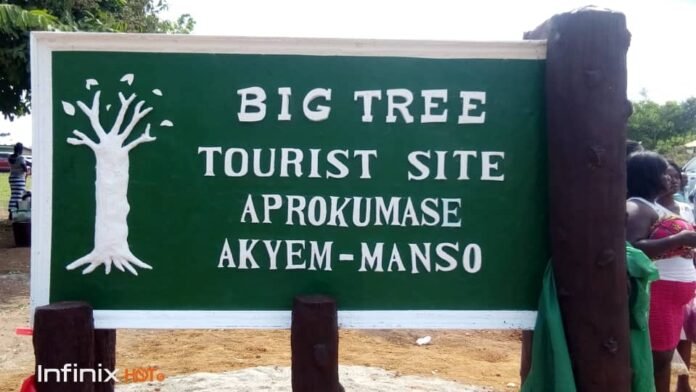 The Minister of Tourism, Arts and Culture, Ibrahim Mohammed Awal, says his ministry has unveiled several activities to grow Ghana’s tourism sector to become the number one contributor to the country’s Gross Domestic Product (GDP).

He said the ministry had embarked on a robust domestic tourism drive, targeting one million Ghanaians to visit tourism sites around the country every year.

He said this during the commissioning of a receptive facility and the Big Tree Tourist site at Aprokumase, near Akyem Manso, in the Asene Manso Akroso District of Eastern Region.

The Big Tree Tourist site was not originally designated as a tourist site until 2004, when under the leadership of late Jake Obetsebi Lamptey, then Minister of Tourism and Modernization of the Capital City, a receptive facility was built for the site, and officially listed the Big Tree as a tourist site.

While urging the two bodies to discharge their mandate proficiently, Dr Ibrahim Awal also charged them to make sure that Oda Big Tree Site receives 3000 visitors every year.

He said the site would be made one of the best tourist attraction spots, and called on stakeholders to ensure its proper upkeep to create job opportunities.

The Eastern Regional Minister, Mr Seth Kwame Acheampong, said the region abounds in many tourist sites of nature, heritage, culture, leisure, and eco-tourism. He noted, however, that “more focus is given to agriculture, trade, commerce, construction, and other economic activities.”

He said the government does not doubt that tourism has the potential to engineer Ghana’s economic growth and job creation.

He said the region is focused on upgrading its existing tourist sites and developing discoveries as part of the national agenda to promote the country’s tourism sector.

The Benkumhene of the Akyem Kotoku Traditional Area, Obrempong Sintim Poku III, urged the district assembly to create avenues to generate revenue from the tourist site to embark on more development projects in the area.

He also called on authorities to deal with illegal chainsaw operators who have resorted to depleting the forest by logging trees.

Majority: 2023 Budget to be presented within stipulated time frame