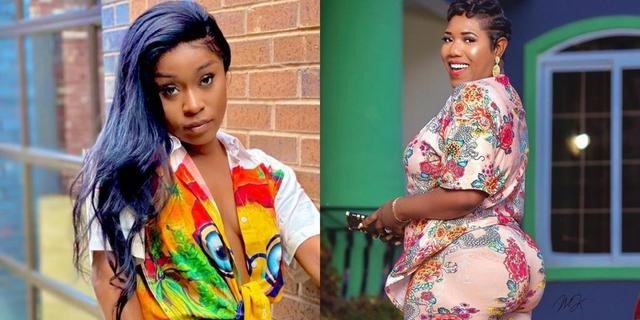 Efia Odo has taken a swipe at her colleague actress Victoria Lebene over a post she made about the ‘Fix the Country’ campaign.

Efia responded to a story captioned: “Your indecent dressing on social media is not helping the cause of the FixTheCountry campaign-Victoria Lebene subtly jabs Efia Odo” which was attributed to Victoria Lebene.

The story was culled from this post that Victoria put on her IG page:

“Don’t say fix and not fix yourself! Change starts with us the youths. The old folks will leave, and when we hold the fort, we will account to everything we do!. COURSE- Means the Direction, Route, Way, the journey! read and research on things before your comment. THANKS!.”

Efia accused Victoria Lebene of trying to pimp her to men for $2,000 some years ago for which reason she had no moral right to judge her for her way of dressing.

“Lol you’re married now so you think you’re decent? Lmaooo you forgot when you tried to “hook” me up and I told you I don’t do hook-ups? Talking bout he will give me $2k 😂😂😂. Bitch you was selling pussy and tried to make me sell mine but now you’re married so you’re decent😂”

“When people get married they think their hoeness gets deleted. I’m trying to be a better person but people really be pushing me,” she added.

Tiwa Savage says Brandy is her biggest influence and talks about...