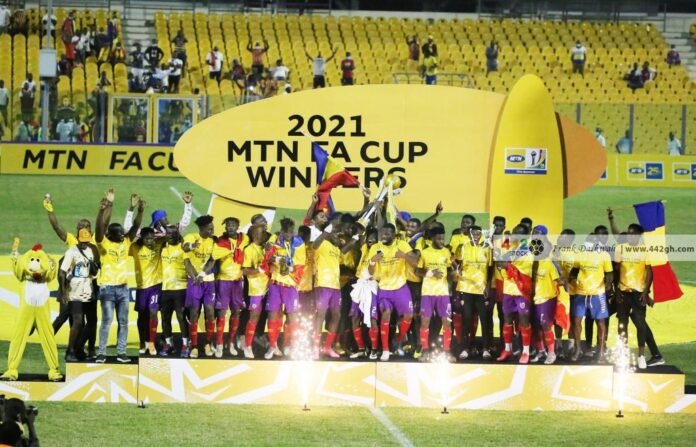 Goalkeeper Richard Attah was the hero as the Phobians defeated the miners 8-7 on penalties following a goalless draw at the Accra Sports stadium.

Attah’s opposite number Kofi Mensah was squandered his side’s last kick as Samuel Boadu’s side secured a historic double – their first double since 2000.

Hearts started the game on the ascendency and went close inside the first two minutes Isaac Mensah played Patrick Razak through on goal.

However, the pacey winger couldn’t not get the ball under his control as goalkeeper Kofi Mensah rushed out to parry the ball away.

The Phobians went close again midway through the first half, with Benjamin Afutu’s towering header ricocheting off the crossbar.

Ashanti Gold ended the half as the better side after enjoying the larger share of possession but neither side could break the deadlock.

The second half began with Hearts dominating proceedings. Raddy Ovouka’s cross found Daniel Afriyie Barnieh in the opposition box but the in-form forward couldn’t steer his header towards goal.

Chances were few and far between for the Miners but Amos Addai, Seth Osei and Amos Kofi Nkrumah were constant threats at the other end.

Both teams could not be separated, however, after 90 minutes as the game extended into extra time.

There were still no goals in extra time but Hearts emerged victorious after triumphing 8-7 in the penalty shootouts to win the FA Cup.

Meanwhile, misses from Amos Addai, David Abagna and Osei proved costly as Ashanti Gold missed out on winning the trophy.

Government must be truthful to Ghanaians – John Mahama

Mahama did no wrong in awarding of cocoa road contracts –...