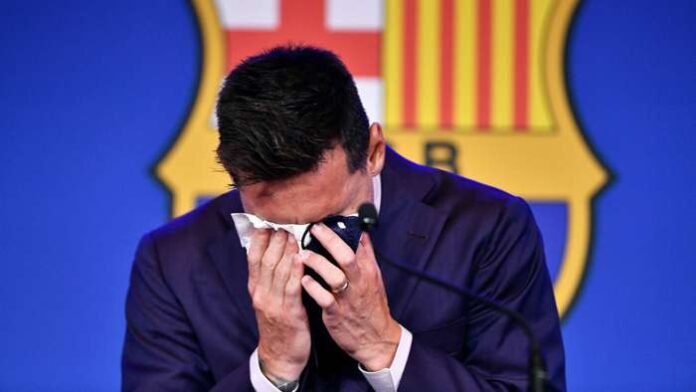 Six-time Ballon d’Or winner, Lionel Messi, was in floods of tears at his final press conference as a Barcelona player as he confirmed that a move to Paris Saint-Germain “is a possibility”.

Messi became a free agent upon the expiration of his contract at Barca in June, and the club confirmed on Friday that they have been unable to tie him down to a new deal due to “financial and structural obstacles”.

The Blaugrana couldn’t re-sign the 34-year-old without exceeding La Liga’s wage limit, meaning their talismanic captain will now be forced to find a new club, and he admits that the whole situation has come as a great shock to him.

“This is very difficult, I was not prepared for this. Last year I was convinced to leave, but this year we were going to stay, my family and I wanted to continue here, in our house,” said Messi.

“After 21 years I’m leaving with my three Catalan-Argentine kids. We’ve lived in this city, this is our home. I’m just really grateful for everything, all my team-mates, everyone who has been by my side.

“I gave everything for this club from the first day I arrived to the last. I never imagined having to say goodbye as I didn’t think about it. What’s clear is I did everything possible, and they (Barca) couldn’t do it because of La Liga.

“A lot of things have been said about me, but on my behalf we did everything I could because I wanted to stay. Last year I didn’t want to stay and I said it. This year I did and I couldn’t.

“I love this club. Without seeing the fans for over a year-and-a-half has been very hard. If I had imagined it [his leaving speech] I would’ve imagined the Camp Nou full and being able to say goodbye properly.”

“At the moment nothing is confirmed, I received a lot of calls after the Barcelona statement. We’re talking about it.”

Messi departs Barcelona as their all-time top-scorer with 672 goals to his name from 778 appearances across all competitions.

The diminutive magician is widely regarded as the finest player to have ever graced the Camp Nou turf, and has won a record six Ballon d’Or awards during his 21-year stay at the club.

Messi has also picked up 34 team trophies with Barca, including 10 La Liga titles and four Champions League crowns, with the 2020-21 Copa del Rey the latest piece of silverware added to his illustrious CV.

What is diabetes and why does it increase your risk of...

Fameye wants his ‘brother’ to Share AFCON Money with him

Workers of Awaso Bauxite Mining on rampage; burn down offices and...