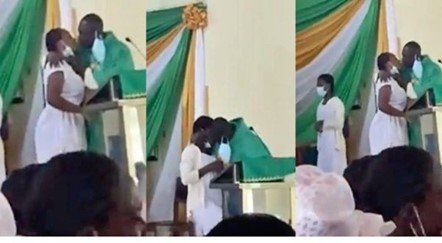 It has emerged that a teacher in the Komenda-Edina-Eguafo-Abrem (KEEA) Municipality, in the Central Region, has impregnated three girls in the same class. It is also reported that seven other girls have also been impregnated by their close relatives in the municipality. The situation, according to the GES, will have a serious psychological effect on the girls.

While the discussions on the issues were ongoing, another disturbing video emerged online in which a priest of the Anglican Church was seen kissing three students of the St Monica’s College of Education, in the Asante-Mampong.

These disturbing incidents of sexual abuse of young girls, especially by elderly men who exert authority over them, are emerging at a time the country is grappling with huge numbers of teenage pregnancies.

In July, this year, data from the Ghana Health Service District Health Information Management Health System (DHIMS) showed that more than half a million teenagers are on record to have gotten pregnant over the last five years.

READ MORE:  MAKING GHANA THE NEXT PALM OIL DESTINATION IN THE WORLD

These figures are disturbing, especially in our part of the world where the education of young girls mostly get truncated as soon as they get pregnant. This is aside from the social stigma and the psychological trauma it comes with, and the problem it brings unto society, including street children, increase in crime in some situations, to mention but a few.

That is why we need to do more as a country in protecting our young girls from irresponsible men who take advantage of their situations to prey on them.

Women over the years have moved from when they were only seen to be good for the kitchen to the point where they are now serving as CEOs and business managers. The Sustainable Development Goal (SDG) Five aims at, among other things, ensuring that at least 30 per cent of top management positions will be occupied by women by 2030.

The country needs to make conscious efforts to ensure that we produce women who can rise to get to that level. However, the dream will come to nought if our young ladies are constantly exposed to sexual abuses that cut short their ambitions.

READ MORE:  THE POLITICS OF DECEPTIONS; 2016 IN REVIEW

That is why we at the Daily Statesman are calling on state actors, civil society, actors in our education sector, among others, to rise up in arms against men who prey on young ladies.

Sexual abuses should not be treated like one of those domestic issues where perpetrators are given a slap on the wrist and asked to go and sin no more. Men who use their power to abuse young ladies must be prosecuted under our Criminal offences Act, 1960 (Act 29), and given hefty punishment to serve as a deterrence to others.

The era where the victims were rather penalised, using socio-cultural beliefs, should be discouraged by all well-meaning individuals. As a country, we need to do well to protect our young ladies from sexual predators, at least, for the sake of the future of the country.