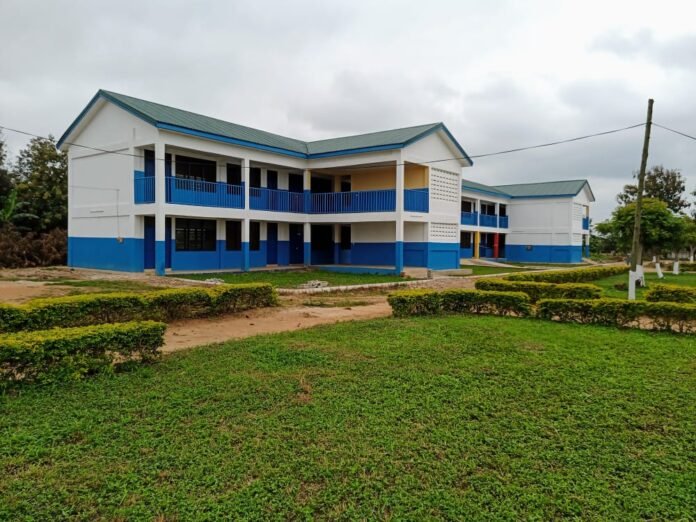 The Ahafo Regional Minister, George Yaw Boakye, has advised students of Samuel Otu Presbyterian Senior High School, at Techimantia, near Bechem, to aspire to attain greater heights in future and avoid any acts that could derail the investments being made in their education by their parents and government.

“Be disciplined and always focus on your studies, having in mind that the sky is your limit. Avoid bad friends, avoid bad habits and always attach maximum seriousness to your studies,” he said.

The Minister gave the advice when he inaugurated a 12-unit classroom block and a girls’ dormitory for the school.

He also presented a brand-new Toyota Hilux pick-up to the school, in fulfilment of the President’s promise some time ago.

The Minister commended the headmaster and staff of the school for their hard work over the years. He encouraged them to continue to work assiduously to uplift the school’s image in the region and Ghana as a whole.

The headmaster of the school, Asare H. Evans, said the projects and the vehicle provided for the school would go a long way to boost academic work.

He commended the Member of Parliament for Tano South, Benjamin Yeboah Sekyere, for being very instrumental in the execution of the projects, as well as the provision of two mechanized boreholes for the students.

READ MORE:  Breaking: Over 420 students out of About 500 Law students Fail Bar Exams

He stated that the Akufo-Addo led government deserves applause for the massive infrastructural development in the various educational institutions across the country.

The Tano South Municipal Chief Executive, Collins Takyi Offinam, used the occasion to assure the people that the President’s pledge to construct the inner roads in the school, as part of the Bechem-Techimantia-Akumadan road construction, is still on alive.

One laptop for every teacher to boost ICT teaching

Afrobarometer? The only survey that counts is on December 7 –...

Rawlings is not a Ghanaian – LPG flagbearer challenges

Minority shot down in abortive attempt to overturn budget approval