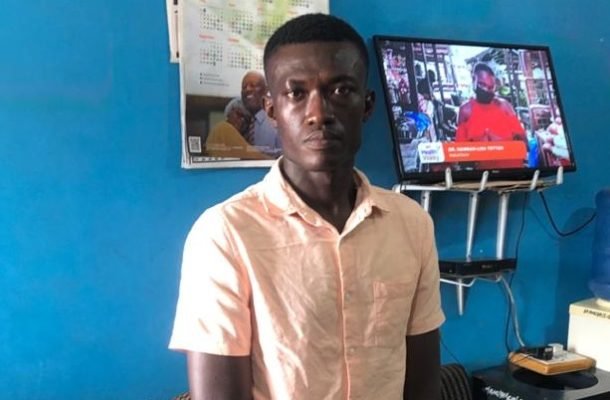 The Police at Abesim, near Sunyani in the Bono Region, have arrested a 28-year-old footballer and an architect for allegedly killing some children and keeping human parts in his refrigerator.

Richard Appiah allegedly murdered his brother, Louis Agyeman, 12, and another boy, Stephen Sarpong, aged 15, and others at Alaska, a suburb of Sunyani.

He is alleged to have been kidnapping children, killing them, and cutting their bodies into parts for sale to people suspected to be engaged in ritual activities in the country.

He was grabbed by the Police when community members who were searching for Louis Agyeman found him dead in the suspect’s room upon a tip-off.

A further search in the room led to the discovery of the head of Stephen Sarpong, who had also been missing since August 15.

Stephen’s head and other human parts were packed in a refrigerator while the body of Louis Agyeman was lying on the floor with blood stains around the head. The Police were then contacted to arrest the suspect.

Following his arrest, the Bono Regional CID took over investigations into the case but after barely 24-hours, the Homicide Unit of the Police took over the case upon the instructions of the Inspector-General of Police, George Akuffo Dampare.

The IGP, who was at Abesim yesterday, visited the crime scene, the Abesim Police Station and held closed-door meeting with the chief of the town.

Earlier in a statement, the IGP commended the collaboration between the residents and the Police which resulted in the discovery of dead persons and human parts in the suspect’s room, saying, “…civil-police collaboration should be deepened to promote peace and security in the society.”

Meanwhile, the family of Stephen Sarpong are calling on the Police to expedite action on their investigations about the case and deal ruthlessly with all those connected to the murder of their son.

They welcomed the decision by the IGP to dispatch a team of investigators from the Police headquarters to assist in the investigations.

Mr Yeboah Asuamah, father of victim, told the media he was shocked to the marrow when news reached him that his missing son’s head was found in a refrigerator in Appiah’s room. He added that Appiah had been joining him to search for the child in the past week.

“He even came to my wife yesterday to ask whether the boy had been found. In fact, the suspect is a very good friend of mine and he visits me every now and then, and so it’s hard to believe he killed my son,” he said amidst tears.

Some residents of Sunyani who spoke to our correspondent expressed shock and utter dismay about the incident.

The second suspect in the case (name withheld) has also been arrested by the Police in Sunyani.

Registration of SIM cards with Ghanacard to begin soon

Group pleads with President to save Neoplan (Gh) from collapse