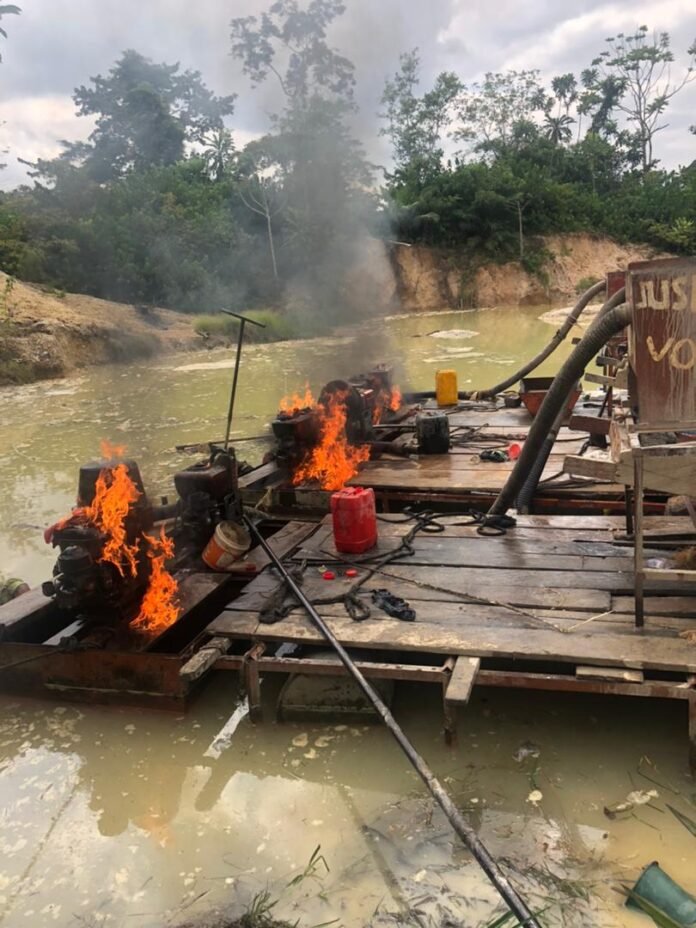 The manufacturing of ‘changfang’ has been banned by the government. The ban follows a clampdown on illegal mining activities on the Ankobra River on Thursday.

The taskforce that embarked on the clampdown destroyed a fleet of floating changfang machines on the river.

George Mireku Duker, Deputy Minister of Lands and Natural Resources, who announced the ban said anyone who flouts the order would be prosecuted in accordance with law.

He gave the directive when he inaugurated a 40-member Ghana National Small-Scale Miners Association taskforce in Kumasi.

He said government would crackdown on all persons or groups engaged in the production of changfang to aid illegal mining activities on rivers bodies.

He announced the formation and inauguration of regional taskforces to support the current operation on river bodies.

He said the Minerals Commission is making available five speed boats to compliment the efforts of the taskforce. He charged the team to devote themselves to the task ahead, devoid of extortion from the public.

Vice-President of the Ghana National Small-Scale Miners Association, Sampson Kofi Wiredu, commended the government for the bold steps taken in curbing and controlling illegal mining. He assured that the taskforce would work to support the government and the country.

He charged members of the taskforce to work to justify their involvement in the operation. “If the country sees your good works, it will reward you,” he said.

He, however, pleaded with the sector ministry to speed up its support to the taskforce for smooth operations going forward.

Group wants purchase of military equipment from 2009 to 2015 investigated

NPP is the only Political Party that can make Ghana Prosperous-...

NPP to protect members against Azorka’s ‘finish am’ threat

Netflix’s advantage over the cinemas is on the rise with no...

Allow EC to do its work; Kufuor cautions

Minority shot down in abortive attempt to overturn budget approval