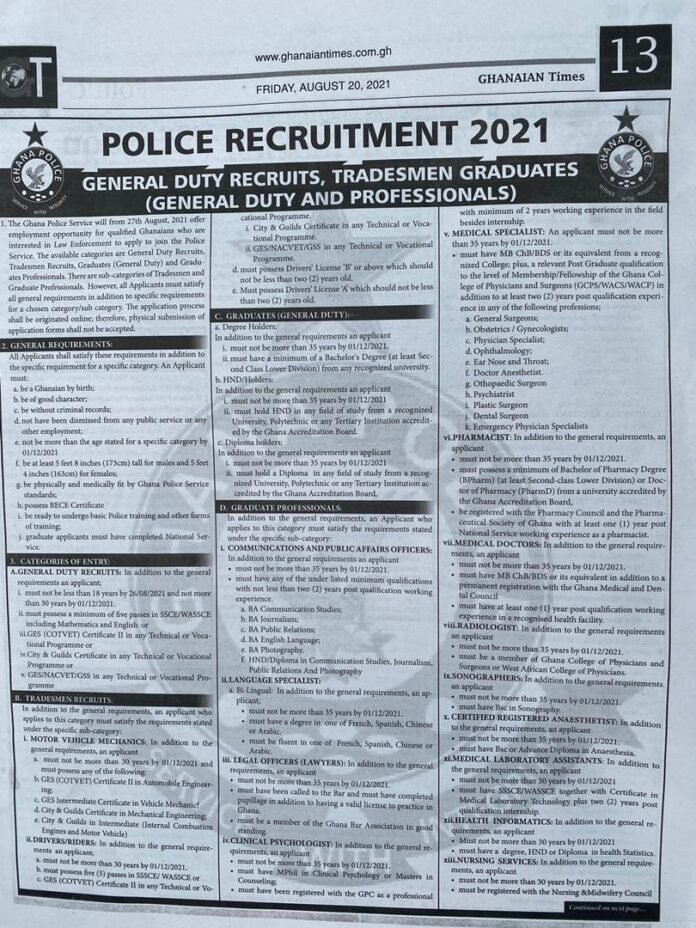 In July this year, the Government, through the Ministry of Finance, granted three ministries the financial clearance to recruit 11,840 personnel to augment their existing staff strengths. The ministries were Education, Interior and National Security.

The Ministry of Interior was granted clearance to enable the Comptroller-General of Ghana Immigration Service, the Director-General of the Ghana Prisons Service and the Chief Fire Officer to recruit 2,000 staff each. The Inspector General of Police was also to recruit 5,000 personnel to augment the staffing position of the Service.

It is important that we call on job seekers to beware of fraudsters. Even in the era of no vacancies announced, we hear on daily basis how people have been swindling young job seekers of their hard-earned money running into several thousands of Ghana cedis under the guise of helping them get jobs. The availability of vacancies on the job market today, therefore, makes the job of the fraudsters ripe.

Several recruitment scams are taking place on the internet, the market, the church or mosque and everywhere around us. They come in very crafty ways that sometimes make their identification difficult, especially in an era of frustration where the job seekers have become vulnerable.

These fraudsters are all over, looking for one to prey on. We are therefore urging the job seekers to be extra vigilant in times like this. The jobs, aside from the forms sold, are to be offered for free, except in exceptional circumstances where some additional money may be taken by the agencies. In such circumstances, usually the said money may be requested after the job seeker has been invited and such moneys have receipt covering them and do not usually run into thousands. They are often some GHC200 for medicals in some rare occasions or at most some GHC500.

A person who come promising jobs in the name of high ranked security officials, politicians, clergymen, some big names in society, and come claiming around GHc2000, GHC4000, GHC7500 and, sometimes above, is most likely to be a fraudster.

This is the time to be extra careful not to fall prey to such predators.

At the same time, this is the time the security agencies must also put measures in place to protect these vulnerable job seekers from fraudsters. The ‘intelligence’ of the intelligence agencies must be sharp around this time, and such fraudsters must be arrested, prosecuted and jailed to serve as deterrence. Politicians and other big names in the society also have a role to play in protecting the job seeking public. Measures must be taken to ensure that people do not use their names and identities to defraud these job seekers.

The thief comes to steal, but there must be a saviour to save the day.

Make the sacrifice for your education worthwhile: Minister tells ‘Akufo-Addo...

NDC Will Not Cancel Free SHS, We are All Enjoying it-Former...

Ghanaians asked to support the aged