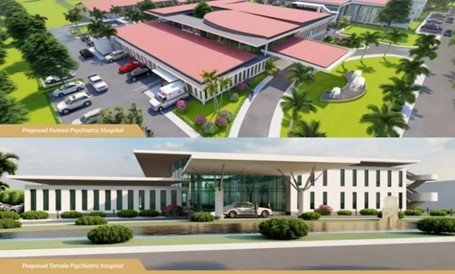 On Tuesday, August 17, 2021, sod was cut symbolically for the commencement of works dubbed Agenda 111. As the name suggests, the project is an ambitious intendment to build 111 new hospitals nationwide. The dream was hatched in 2020 following a further exposure of the nation’s health inequities and infrastructure deficit amidst the COVID-19 pandemic.

True to form, the dream was originally announced to the world during the “Fellow Ghanaians” serial number 8 update on COVID-19 measures. In substance, a technical team was put together to fashion out the programme for execution. It is the work of the committee under the headship of the first woman Chief of Staff of our Republic that produced 101 instead of 88 District Hospitals. That, in addition to seven Regional Hospitals, two new Psychiatric Hospitals and rehabilitation of Effia-Nkwanta Hospital make the audacious dream 111.

A well-known Ghanaian architect of repute, Kwabena Nyarko, is the Project Coordinator. Thus far, he has explained with technical clarity what it means to commence work at site. Beyond the funfair and political pronouncements, there are activities that will precede the actual commencement of work by the contractors. These include the ‘handing over of site to the contractor’ and the ‘notice to commence work’ with the attendant underlies such as recruitments per the contract terms.

Perhaps as the dreamer, the President may have to pay attention daily to the progress of work. He can pay unannounced visits to sites and also check on payment plans as well as how certificates raised are honoured in time.

Some have said the project is too ambitious and impossible. Others have called it political gimmickry. As usual the reasons for such fears, genuine or not have to do with project time, span and scope, funding and the mandate of the President. It is my contention that legitimate as these fears may be, there is no project in our nation’s history that did not suffer same fate. Yet, we can boast of the Volta or Akosombo Dam Project, Ghana Education Trust Schools, Universities, Rural and Urban Electrification, Scheme on National Health Insurance, Commercial Find of Oil and the audacious Free SHS etc. This too can be done, no doubt!

READ MORE:  Re – Salaries and conditions of service of teachers: a historical note

So let the doubters doubt, but also give the doers the benefit of doubt. At this stage, the balance of responsibility tilts more to the dreamers and supporters of the dream to make it work or miss out in doubt. It is emerging, as alleged by Architect Tony Asare, that there may have been breaches of law in contracting the architectural drawings and designs for Agenda 111 (August 22, 2021 citinewsroom). It is further argued that the Estate Department of the Ghana Health Service has in its custody designs for District Hospitals which serve as a spine for the various functions of a hospital. Why did we at a cost have to contract new designs? It is not too late. Let’s right the wrongs and rally more support for this national life transforming exercise.

Obviously, the project time of 18 months in strict technical sense cannot be the same as literal 18 months as most Ghanaians may be thinking. It is imperative to let the technical people with the requisite knowledge of appropriate language lead the conversation and discussion on activities. It cannot be political talking or showbiz as usual. The dream is big and thus require considerate and measured language. Let the Consultant lead and direct the discussions.

Secondly, as a people, we need to begin to appreciate the right fora for each conversation. Parliament as the House of Records was instituted as part of our democratic life to ensure that no one takes the nation for granted. There are 275 Members of Parliament so close in numbers in terms of Majority and Minority. Let us direct the key nagging issues through them to elicit the right answers from persons placed in positions of trust over State bursary. If we run on speculations and hearsays, it is the nation and the very democracy that suffers. Thus, there is the need for transparency and candour from both applicants and respondents.

READ MORE:  The gas in human form; the Ghana Gas story and success

A major reason for failures in the effective and efficient application of scarce revenues from our natural resources has been the thin and unrestrained spread. Limited resources are spread over too many sectors making it difficult to measure any meaningful impact. Agenda 111 cannot have money thrown at every site at a go and expect to be completed. The project must be phased out into realistic milestones. A breakdown of Agenda 111 is suggested into Agendum 30-30-30-21. The completion of the first 30 will work magic.

In my view, breaking down the bigger agenda into practical agendum will pave the way to prioritize the more needy districts over lesser needy ones. It cannot be that all the 101 Districts identified in the feasibility or baseline study are at the same scale of need. Let us leverage on the differentials without political or partisan bias and roll out this all-important assignment that will put the nation on the path of working for the citizenry. Phase the project, Agenda 111 by prioritizing the districts according needs.

There is ambiguity as to where this audacious project will source funding. It is worrying but not fatal. Most ambitious projects go through the funding challenge phase. However, the drivers and dreamers quickly work around it once flagged. The project cost has been estimated. In the words of the President “each hospital is being constructed at the cost US$16.88 million.” Put together, the 111 hospitals will cost a whopping US$1,873.68 billion making the seed money of US$100million a drop in the ocean. We do not know where the money will come from or how Government intends to raise the funds. But it is argued that if Government wills, it will find the way.

The Honourable Deputy Minister for Finance, John Kumah, has been quoted as saying that the Ghana Infrastructure Investment Fund, GIIF is the vehicle to drive funds mobilization (myjoyonline.com August 22, 2021). The framework for fundraising should be drawn and made transparent. Let the nation know that there is a genuine concern and interest to make this project come to fruition. The citizenry must be made to see beyond the rhetoric that something real is happening. Let the cultural heads, religious and other opinion leaders be part of the fund mobilization effort for participation and ownership.

READ MORE:  Let us stay focused; our target is not just 2020 but way beyond

President Akufo-Addo is in the 8th month of his second term. Already, the 8 out of 48 months have signalled an exit which is being preached amidst executing the 4-year mandate. Politics can be very interesting. The haste to see the back of the President has led to questioning the possibility of completing the project within his mandate and legitimately so. If one considers the proposed phasing of the project as shown above, then surely, only a little over 60 of the 111 can be truly completed in 36-40 months. Finishing more than half will be a plus nonetheless. What this fear invites is the consolidation of the project programme into one of national consensus and cohesion beyond President Akufo-Addo and the New Patriotic Party, NPP.

Let the President revisit the chiefly call of various clan or family heads as he did in the early chaotic and panic days of COVID-19 at the seat of Government. When we meet to discuss the common interest of providing our people with the necessary health infrastructure there can be no room for mischief. At such community of ideas sharing, the mischievous will be betrayed and trapped by their own words. No one who seeks the mandate of the people will dare want to be seen as being against their interest. Let us march forward then as a people knowing that we can make Agenda 111 possible or miss out.

The writer is the Managing Editor of The National Forum, TNF newspaper and a Research Student at the School for Development Studies, UCC.

US Polls: If Trump wins I may pursue a PhD in...