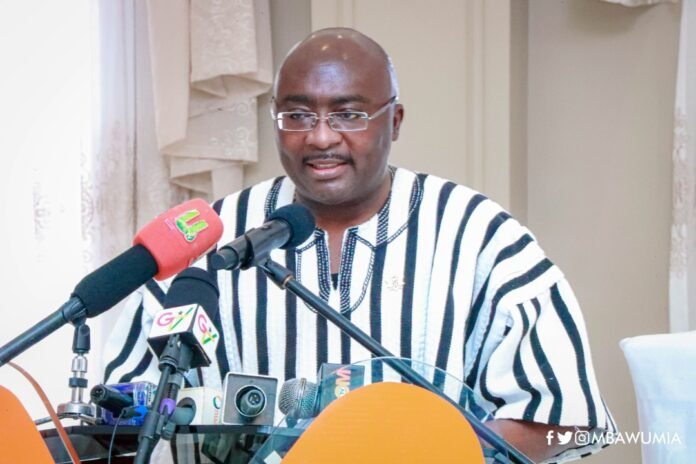 Vice-President Mahamudu Bawumia has charged Members of Parliament on the Majority side to continually arm themselves with the “great success stories and achievements” of the NPP administration in order to dismantle any propaganda and lies churned out by the opposition.

“There is no better group to respond to these attacks, to set the records straight and to match them ‘boot-for-chalewote’ than the Majority Caucus of Parliament. Fortunately, we have enthusiastic leaders and members of the Majority Caucus, and what is needed is the requisite cooperation and exchanges between you and the Executive,” he stated.

The Vice-President said this during a workshop organised for the Majority Caucus and members of the Executive at Nkwatia-Kwahu in the Eastern Region over the weekend.

He further urged the MPs to strengthen the bonds between Parliament and the Executive as they work hand in hand to fulfil the promises made to Ghanaians, and further earn their trust to continue governing the nation.

He reminded the MPs that they are an integral part of the success or failure of the Executive and by extension the NPP administration, urging them to always remember the key communications role they play and work extra hard to respond appropriately to any attempt to downplay the achievements of the Akufo-Addo administration.

“We need to tell our story. We need to let Ghanaians know how we have been able to reduce, not completely eliminated, but reduced the hardships. The hardships were there before we came into office in 2017, but we have done so much. This is an area we should not shy away from,” he said.

Listing some successes of the government, the Vice-President noted: “In the area of social interventions, our government has been just marvellous. I can list at least 50 policies and interventions that we have made to reduce the suffering of our people – NABCO for the graduate unemployed; 50% of all operators at the toll booths are persons with disability; Ghs2m each for the Presidential Empowerment of Women and Men with Disability; clearance of goods at the port through the paperless system has been made much easier and reduced so much suffering of importers.”

Meanwhile, NPP’s General Secretary, John Boadu, has called on the leadership of Parliament to “continually do peer review of our MPs not only in Parliament and committees but also their performance in their constituencies”.

He noted that such review would enable party leadership take certain delicate decisions on behalf of the party. He said some of the decisions taken by the leadership, especially in some constituencies, saved the party in the 2020 general election.

“The high attrition rate we are recording in Parliament is largely due to the lack of cooperation you, as MPs, get in your constituencies, particularly with your MMDCEs.

“Having regard to this imbalance, the party in the last general election tried its best to protect some of the Members of Parliament from intense parliamentary primaries, where the situation demanded. These moves, even though was met with some degree of resistance in a few constituencies, were successful elsewhere, and I am glad to observe that our efforts paid off,” he said.

He noted that but for that decision, the party would have struggled in the election, adding that most of the places where the party lost in the 2020 election were places where parliamentary primaries took place.

Speaking on behalf of the MP’s, the Deputy Majority Leader, Alexander Afenyo-Markin, urged the government to continue to work hard to alleviate the concerns and plight of Ghanaians.

“While these concerns are sometimes unfounded and unpalatable, there are times that they are plain truths and, by this, I mean that they are the realities facing majority of the people who voted us to power to serve them and our country,” he said.

He therefore urged the government to accept such concerns when raised and know that while the government has done well, there is still much more to be done.

The Judge verses the journalist

Mahama’s politics of manipulation and regression

Barack Obama Reveals Why He & Michelle Almost Broke Up After...