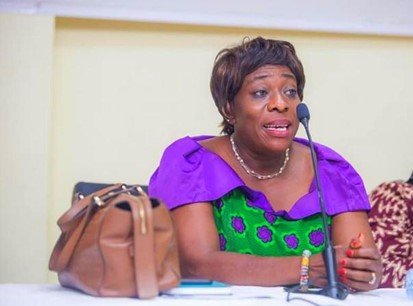 The former NPP Member of Parliament for the Evalue-Gwira-Ajomoro constituency in Western Region, Catherine Ableema Afeku, says she has tough skin and that no amount of ‘mafia’ tactics  by her critics will intimidate her.

She says ‘mafia’ tactics is nothing new to her, and has urged those attempting to end her political career to rather re-strategize.

“Whether they like it or not, I will bounce back in 2024 to snatch the seat,” she stressed.

Mrs Afeku’s outburst was in reaction to allegations being levelled against her by some chiefs, who claim she pocketed a greater percentage of funds earmarked for the celebration of their ‘Kundum’ festival when she was Minister of Tourism, Creative Arts and Culture.

According to Nana Nkwantabisa,  Chairman of the Axim Kundum Planning Committee, only GHC70, 000 out of the GHC200 000   quoted in the 2018 Auditor-General’s report was given  to them by Mrs Afeku  for celebration of the festival  during her tenure of office as Tourism and Creative Arts Minister.

The paramount chief of Nsein, Awulae Agyemfi Kwame, also insists he never received a pesewa from the package as being alleged, and dared the former minister to come out to state how much was given his traditional area.

But at a press conference last Thursday, the former MP said she had done nothing wrong, neither had she pocketed any money,  and wondered  whether her critics did not see the artistes brought in from Accra to add colour to the celebration.

She  indicated  that  nowhere in the report was  the name of any chief or palace mentioned, and dared her critics to provide any evidence to that effect or meet her in court for defamation of character.

The former MP said she had been vilified for the past 17 years by some chiefs in the constituency, and questioned what they stand to achieve by throwing mud at her.

“Every constituency supports its own.  It is only in Nzema that valuable assets are thrown away for dogs to eat,” she lamented.

Recounting her roles as a former cabinet minister, the spokesperson on infrastructure during former President Kufour’s  era and Member of Parliament for two terms , she said she had brought honour and dignity to  her people and should not be defamed for no wrong done.

Meanwhile, a group calling itself ‘Concerned Youth of Axim’  has issued a 7- day ultimatum, ending Wednesday September 1 , to Nana Nkwantabisa to retract his unfounded allegation against Mrs Afeku or risk losing his position as ‘development chief.’

They have also threatened to embark on demonstration against him to register their protest for his action.

In a statement signed by their convener, Theophilus Musah, the youth called on residents of Axim, both home and abroad, to join in the fight of restoring  sanity and dignity in the Kundum festival.

A copy of their statement was later sent to Nana Adusei II,  acting President of Upper Axim and member of the  Kundum  Planning Committee, who rubbished  the allegation against Mrs Afeku.

Kwabena Abankwa-Yeboah, A Pillar Of Support For Welfare Of Party Executives...