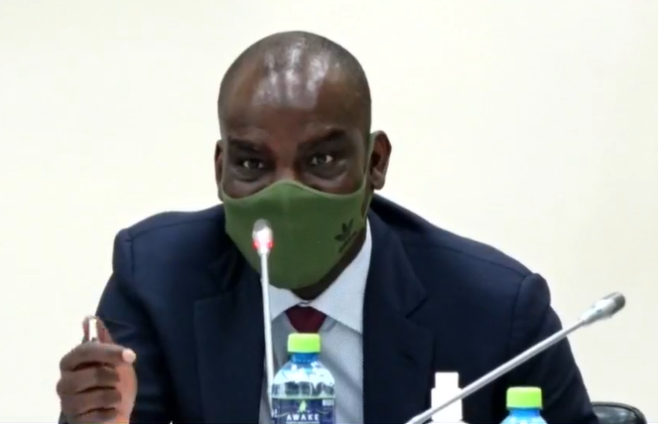 An attempt by the National Democratic Congress Minority in Parliament to overturn the approval of the 2022 Budget Statement and Economic Policy of the government was shot down yesterday after a fierce resistance from their counterparts from the New Patriotic Party Majority Caucus.

The attempt was led by the Minority Leader, Haruna Idrissu, who moved a motion for the reversal of the decision to approve the budget by only the Majority Caucus on Tuesday following the boycott of proceedings of the House by their NDC counterparts.

The Minority Caucus had voted last Friday to purportedly reject the budget after their NPP counterparts staged a walk-out in protest against the presence of the NDC’s General Secretary, Johnson Asiedu Nketia, at the public gallery, after the Minister of Finance had been asked to leave the chamber of the House by the Speaker, Alban Bagbin.

The Minority’s decision was however overturned on Tuesday by the Majority, who went ahead to approve the budget. The Minority were yesterday seeking to overturn Tuesday’s decision by their Majority counterparts. Among their major arguments was that the First Deputy Speaker, Joseph Osei Owusu, who presided over Tuesday’s sitting, could not have been counted to make up for the number of MPs required to take the decision.

After arguing that he was entitled to be counted as a Member of Parliament, Mr Osei Owusu threw out the motion by the Minority Leader.

“I have not heard anything here today which was not discussed yesterday. All the arguments today were practically the arguments made yesterday. There are a few matters which I wish to clarify, that first, it must be clear that a Deputy Speaker is not a Speaker. Indeed, Article 96(1) of the Constitution says, and I quote, ‘There shall be two Deputy Speakers of Parliament who shall be elected from the Members of Parliament’…

“When it comes to the question of voting, it is very clear anytime any of the Deputy Speakers or any other member elected to preside is in the chair, that member does not vote. That has never been in dispute. I did not vote while presiding,” he added.

Before his ruling, Minority Leader Haruna Iddrisu had insisted that the processes used for approving the budget on Tuesday were a betrayal of the Standing Orders of Parliament and the 1992 Constitution, hence his decision to move a motion to reverse it.

“Mr Speaker, yesterday, as reported by the Votes and Proceedings which has been adopted, I’m begging to move that the decision which was taken yesterday in adopting purportedly a budget statement subject to concessions was unconstitutional and a betrayal of our rules and standing orders and a betrayal of the 1992 Constitution,” he contended.

The Majority Leader, Osei Kyei-Mensah-Bonsu, also argued that at the time Parliament voted last Friday to reject the budget, the House lacked the legal and the constitutional capacity to take that decision.

“So, at the time that the votes were taken (on November 26), this House lacked the legal, in fact, the constitutional capacity, to take the decision,” he said.

The Majority Leader said he entirely endorsed the position taken by the First Deputy Speaker that the House did not have the number constitutionally required to take a decision at the time.

“So, compatriots, what we have done is just to recognise the fact that what happened on that day was a complete violation of the Constitution; it cannot stand any constitutional test or even the test of our own Standing Orders. It is the reason why we said that it is nullity, it is void and is of no effect,” he stated.

Investigate, Arrest and Subject Kumasi “Killers” to the Law – Mahama...