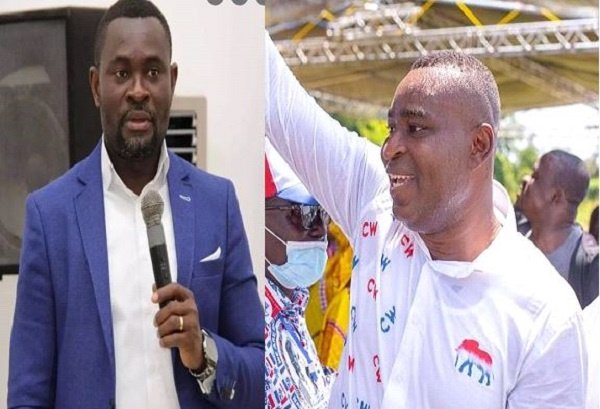 The executives of New Patriotic Party in Ejisu Constituency of the Ashanti Region has rubbished the allegations made by Some angry members of the party against Ejusi MP and the regional Chairman Ahead Of Internal Election.

Some angry members of the ruling New Patriotic Party (NPP) in the Ejisu Constituency called on the National Executive Committee (NEC) to call the Ashanti regional Chairman, Mr Bernard Antwi Bosiako known as Chairman Wontumi and the Member of Parliament for Ejisu, John Kumah to order or there would be a bloody clash in the upcoming Polling station elections.

According to the aggrieved members of the party, Chairman Wontumi has again launched his mafia tactics which caused the party in the 2020 parliamentary elections.

Mr. Kwaku Frimpong, a polling station executive in the Ejisu Constituency speaking in an interview stated that the upcoming Polling Station elections of the party are gaining notoriety for clashes as aspirants, groups loyal to them turn against their opponents.

“The National Executive Committee must call Chairman Wontumi and John Kumah to order or there would be a bloody clash.

But according to a statement signed by Acting Research and Elections Officer ,Ejisu Constituency, denied the publication as false and baseless propaganda Against chairman Wontumi and Hon Dr. John Kumah, MP for Ejisu.

Below is the full statement:

RE: Call Chairman Wontumi and John Kumah to order – Angry Ejisu NPP members to NEC
The attention of the New Patriotic Party in the Ejisu constituency has been drawn to an interview granted by one Mr. Kwaku Frimpong, a polling station executive alleging that the Member of Parliament for Ejisu, Dr. John Ampontuah Kumah and the Ashanti Regional Chairman, Mr Bernard Antwi Bosiako known as Chairman Wontumi have connived to deny some party faithfuls the opportunity to contest in the upcoming polling station and electoral elections.
Let it be placed on record that all the statements made by Mr. Kwaku Frimpong are false and designed to create unnecessary tension in the region ahead of the upcoming polling stations and electoral elections.

It is important to note that the constituency has not received any nomination forms from the National headquarters for the conduct of the elections yet. The party has rather programmed electoral activities to start from Saturday, February 19 2022, making it very absurd for anyone to suggest that even before the party sends the forms and opens nomination, some people have been denied access to picking the forms.

It is further alleged that if care is not taken, the elections will be bloody, suggesting that there is some disunity in the constituency. This prediction is a figment of the imagination of Mr. Kwaku Frimpong and will never happen in the constituency.

READ MORE:  Takoradi PTC interchange workers demand increased wagesSome residents of Sekondi-Takoradi working on the PTC Interchange say they are not happy with the meagre daily wages being given them by the Synohydro contractors, and are therefore demanding an increment. The angry workers yesterday embarked on demonstration against the contractors, and resolved not to resume work until their demands were met. It took the intervention of Kwabena Okyere Darko-Mensah, the Western Regional Minister, to calm nerves after assuring them of a meeting with the contractors. Very low Some of the workers who spoke to Daily Statesman said they receive GHC19 .00 a day as wages. According to them, the minimum wage being paid their counterparts working on other projects is GHC50.00 a day, with the maximum being GHC400.00 This, they said, is in addition to free lunch. The workers said they spend part of the GHC19.00 on transport fares to and from work every day, pay rents, schools fees and also feed their families. Wondering whether they are magicians to foot all such bills with GHC19.00 daily wage, they said they would not allow themselves to be cheated. They said none of them had also been offered an appointment letter, with an excuse that it would be done later. In their view, this is a cunning way by the contractors to cheat them, but insisted that their trick would not work. Concerns Their uproar has raised eyebrows in the metropolis, with many concerned residents lambasting the Chinese contractors for trying to pull a fast one on the indigenes to maximize their profit. They intimated that even a private person undertaking project pays GHC60.00 and GHC40.00 respectively to the mason and his helper, and wondered why the Synohydro contractors should pay that 'inhuman and insulting' wage for construction works on the interchange which is supposed to be a national project. The concerned residents said this attitude has the tendency of slowing pace of work on the project, and urged political leaders to call the contractors to order.

We as a party can not and will not allow such doomsayers to destroy the wonderful work that is happening in the constituency. We will like to admonish Mr. Kwaku Frimpong and his ilks to desist immediately from the path they have taken and follow the necessary laid down procedures if they have any concerns.

Non-sexual ways to turn on your partner

Savings and loans depositors to get 100% of locked up funds