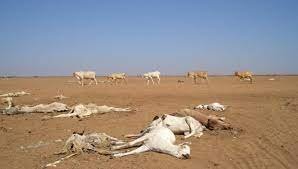 The United Nations has predicted that Climate change is likely going to make the world sicker, hungrier, poorer and much more dangerous by 2040 with an “unavoidable” increase in risks. It has noted that there remained only “a brief and rapidly closing window of opportunity to secure a liveable and sustainable future for all.”

In a report released on Monday, the UN Intergovernmental Panel on Climate Change’s (IPCC) warned that humanity is not ready for the dire impact climate change is about to visit calling for drastic action on a huge scale.

It said if human-caused global warming was not limited to just another couple tenths of a degree, the earth will degrade in 127 ways – with some being “potentially irreversible” in future decades, pressing governments to cut heat-trapping carbon emissions.

Commenting on the report UN Secretary-General, Antonio Guterres, said “Adaptation saves lives,” adding “as climate impacts worsen – and they will – scaling up investments will be essential for survival… Delay means death.”

The 3,675-page report is the latest in a series by the IPCC detailing the global consensus on climate science. It focused on the effect on nature and societies, and what needs to be done to adapt.

The report noted that Children today who may still be alive in the year 2100 are going to experience four times more climate extremes than they do now even with only a few more tenths of a degree of warming over today’s heat. It indicated that if temperatures increase nearly two more degrees Celsius from now (3.4 degrees Fahrenheit), they would feel five times the floods, storms, drought and heatwaves, according to the collection of scientists at the IPCC.

Large numbers of people are being displaced by worsening weather extremes. And the world’s poor are being hit by far the hardest, it said. More people are going to die each year from heatwaves, diseases, extreme weather, air pollution and starvation because of global warming, the report added.

“Inequality is at the heart of today’s climate crisis – in the little over 100 days since COP26, the richest 1 percent of the world’s population have emitted much more carbon than the population of Africa does in an entire year,” said Nafkote Dabi from the UK-based charity Oxfam.

READ MORE:  MINISTER ORDERS FOR A STOP IN THE USE OF LORRY TYRES FOR MEAT PREPARATION

“People living in the most affected countries do not need this report to tell them that the climate has changed. The highest price is already being paid.”

Mohamed Adow, from the climate think-tank Power Shift Africa, said: “This IPCC report is a fire alarm for the planet. As a species we are currently failing to adapt to this changing world. Or more accurately, the rich, polluting, global north has changed the planet through fossil fuel burning and is now refusing to help those suffering the effects.”

How many people die depends on how much heat-trapping gas from the burning of coal, oil and natural gas gets spewed into the air and how the world adapts to an ever-hotter world, the scientists said.

“Climate change is killing people,” said co-author Helen Adams of King’s College London. “Yes, things are bad, but actually the future depends on us, not the climate.”

By 2050, a billion people will face coastal flooding risk from rising seas, the report said. More people will be forced out of their homes from weather disasters, especially flooding, sea level rise and tropical cyclones.

If warming exceeds a few more tenths of a degree, it could lead to some areas becoming uninhabitable, including some small islands, said report co-author Adelle Thomas of the University of Bahamas and Climate Analytics.

And eventually in some places it will become too hot for people to work outdoors, which will be a problem for raising crops, said report co-author Rachel Bezner Kerr of Cornell University.

“Nearly half of humanity is living in the danger zone – now. Many ecosystems are at the point of no return – now,” said Guterres.

“This abdication of leadership is criminal. The world’s biggest polluters are guilty of arson of our only home.”

The International Federation of Red Cross and Red Crescent Societies said it is possible for world leaders to work together to tackle the crisis.

“The global response to COVID-19 proves that governments can act decisively and drastically in the face of imminent global threats,” said Secretary General Jagan Chapagain.

“We need the same energy and action to combat climate change now, and we need it to reach the most climate-vulnerable communities across the world so that they have the tools and funding to anticipate and manage risks.”

Re: Gov’t Security Agencies Must Guarantee Safety of Journalists – John...