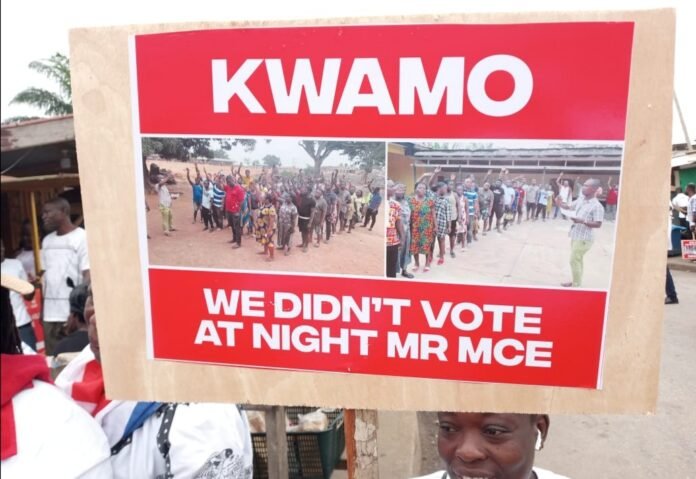 Elected polling station executives of the of New Patriotic Party in the Ejisu constituency have called out the Municipal Chief Executive for Ejisu, Mr. Samuel Frimpong for spreading misinformation on the just ended polling stations and zonal elections.

The delegates during a demonstration on Wednesday, March 16, 2022 shown various pictures and videos of the election being conducted in broad day light to buttress their assertion.

They further indicated that the MCE is a liar and is making this baseless claims because his supporters lost in the just ended elections. The executives insist that they did not cast their votes at midnight and the election organized was free and fair.

READ MORE:  I have a solid team to deliver NPP Victory – Mac Manu

Leticia Amoateng, a polling station executive for Onwe in addressing the media expressed her surprise at the conduct of the MCE and could not fathom why he will go on air and lie about an election he knows was free and fair.

“Mr. Frimpong has really disgraced some of us. All the tension and issues that have emerged after the election is because he wants his brother the MD for ECG to become the next MP for Ejisu . Before the election his supporters were applauding the election committee for a good job, after they lost the election, they have insulted and attacked everyone including our MP” she added the delegates expressed disgust at the conduct of the MCE and advised him to dissist from spreadind lies about the piolling station and the 2nd elections.

Gov’t directs state agencies to patronise ‘Made in Ghana’ vehicles

PYP Salutes Nana Addo for Not Renewing Contract of ...

Women asked to report all acts of violence against them