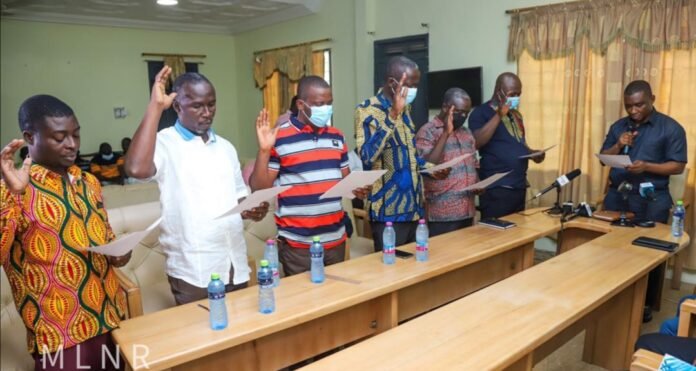 “The herculean task handed you is a manifestation of our absolute belief and confidence in you to deliver on your mandate and help shape the mining industry in the country, particularly your district.”

These were the words of the Deputy Minister for Lands and Natural Resources in charge of Mines, Hon. George Mireku Duker when he inaugurated the Amenfi East and West District Mining Committees on Thursday, March 17, 2022.

He stressed on the indispensability of the committee in regulating mining at the local level and implored on the committee members not to shirk responsibility.

“It is important that you take this mandate seriously because you have a charge of regularizing the mining sector to the satisfaction of the Ghanaians. More especially making sure that the river bodies in this district are in good state as far as this country is concern,” he said

He disclosed that the Ministry has secured river guards for the protection of the various waterbodies and that the responsibility now lies on the district mining committee to continue the operationalization of the guards.

The Deputy Minister beseeched them to make available the needed resources to aid the work of the guards to guarantee effective monitoring of the river bodies.

“As a ministry we have done our part by recruiting river guards that will be patrolling the banks of the river bodies but this cannot be done without your efforts.”

He added that “we will not relent in ensuring that the operation halt two(2) that the government has launched will continue controlling these areas to sanitize the enclave. We expect you to support the activities of these institutions that have been established, it is also expected of you to create enough jobs for the teaming youth. This can be achieved by having a data base of all viable Concession in the municipality through the minerals Commission to know the areas government can support with equipment.”

Hon. Duker warned once again that the Community Mining Scheme which has come to replace the destructive ‘galamsey’ is the preserve of Ghanaians and that government views it a module to enhance the welfare of the Ghanaian youth.

He, therefore, preached against the involvement of foreigners in any small-scale mining and cautioned that the full rigours of the law will be activated on anyone who goes against the directive.

He disclosed that government has procured mercury-free machines for the purpose of sustainable and safety mining activities.

On his part Hon. Fredrick Korankye, the MCE of Amenfi East expressed his gratitude to the Deputy Minister and promised to work tirelessly to sanitize the mining sector of the municipality.