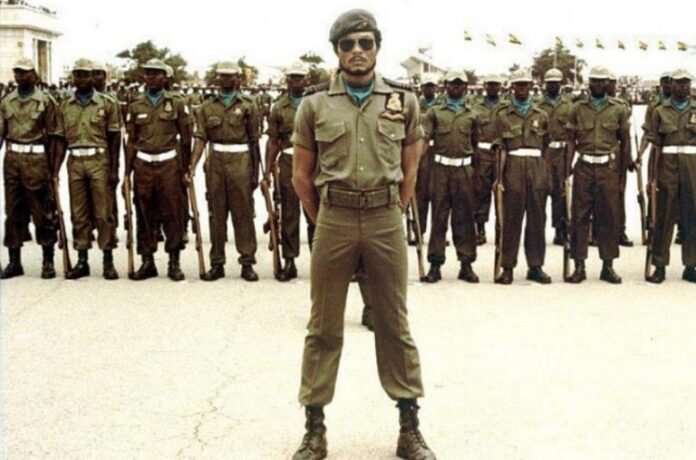 Love or loathe him, this was leadership at its best. A typical Ghanaian would never say that. The higher the risk, the higher the reward. Those words saved and rewarded him heavily.

I read that Nana Akufo-Addo was holding a crunch cabinet meeting over elevy or IMF. I couldn’t believe this nonsense. No competence, no courage and definitely, no class.

The elevy is the least of Ghana’s problem. It’s a dead on arrival tax.

The biggest threats to our economy are:
1. Nosediving cedi
2. Galloping inflation

The elevy isn’t a solution to either of them. Any form of “economic forum” should be to fix the above 2 issues.

The ¢ has plummeted and continues to do so because of weak macroeconomic fundamentals and speculation fuelled by:
*Azaa budget that nobody believes its projections
*A clueless economic management team that has no credibility domestically & internationally
*Political instability manifested by severe “allergic” and psychotic reaction to the word coup.
*Multiple communicators exhibiting plain buffoonery and escalating an already anxious state to panic attack mode. The result isn’t just withdrawal to safety of $ investment but panic conversion of ¢ into $ by Ghanaians. This is basic commonsense. Why will rational people keep a currency that’s depreciating everyday in the bank?

READ MORE:  There Is Nothing Lucrative In Parliament ....Former MP

Calling a crunch meeting is a clear manifestation of lack of leadership. It seeks to share the ownership of any decision with everyone so to escape accountability when the decision fails.

We need a leader who at this time of a crisis created by himself will stand up and say, “fellow Ghanaians, leave my economic management team alone. I’m responsible for everything.” Then go on to apologize to Ghanaians for failing to deliver the great promises he made to them, while putting in place serious corrective measures that will inspire the nation, the international community, and the fibrillating money markets.

If I were the President, I will do the following:

1. Dissolve the economic management team and create a new broad based one.

3. The new Finance Minister to release Budget 2022 2.0 addressing the wrong projections and the underlying fiscal fragility – cut expenditure by about 30% and drop the elevy and the import duty changes. Cutting expenditure will limit printing of more ¢ that’s partly responsible for sending the currency to the gallows and also reduce the inflationary pressure in the system. We can’t spend what we don’t have, can we?

READ MORE:  Samuel Okudezeto-Ablakwah is unfit for his current role

4. Free “political prisoners” to try and bring the nation together. You’re looking weaker and scared. Not good for the fluttering market.

5. Undercut the opposition by extending an olive branch to them – form a bipartisan economic rescue team to advice the new economic. management team.

6. Stop the intrigues with the judicial process. It’s embarrassing. Reputations of good people sitting as judges are being damaged rightly or wrongly.

7. Work with the split parliament through cooperation and not confrontation.

8. Boldly admit all errors with a clear statement to correcting them:
*Reverse the decision to create 6 new regions, *MMDAs back to original 110,
*Parliament to original 200seats and redistribute seats properly through population quotient as stated clearly in constitution, and
*reduce ministers to 25.

You can’t do most of them immediately but leveling up with the people on them and making it a policy issue is appropriate . I know it’s not easy for an average politician to admit his errors but if you’re able to do so, you will regain some trust.

9. Get one self-respecting communicator who’ll talk with decorum to the country and the world consistently and coherently. It’s very important for trust and confidence building. Patapaa doesn’t work.

10. Never forget 1Thessalonians 5:3 “For when they say peace and safety, then sudden destruction comes upon them.” Don’t listen to the liars around you. The country is very hot. The cost of living is crushing everybody. Elevy protests will soon turn into anti government protests as it’s happening now in Sri Lanka, the only country that uses more of it’s revenue to service its debts than Ghana. Nana, the signs are not good. Save yourself like Rawlings did, “leave my men alone. I’m responsible for everything.”

Are you ready and capable? Close that useless meeting at Peduase immediately.