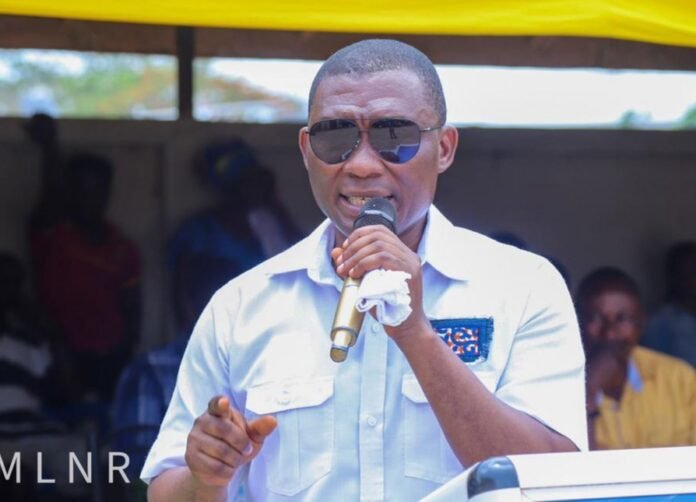 Some residents of Ntroboso community in the Atwima Mponua district of the Ashanti Region who had their properties accidentally destroyed during an operation Halt II activity may be compensated subject to the final investigation report by the government, Hon. George Mireku Duker, the Deputy Minister for Lands and Natural Resources has hinted.

Hon. Mireku Duker stated this when he paid a working visit to the community on Thursday, March 31 2022 to gain first hand information of the incident that occurred.

He relayed the message of regret and comfort from the Sector Minister, Hon. Samuel A. Jinapor to the victims.

Government, he said “is ready to support the man who lost properties in the incident,”.

Hon. Duker however, lamented how illegal mining activities in the area have utterly degraded the environment and water bodies in the area especially River Offin.

According to him, illegal mining threatens the very survival of the people within the community and made a passionate appeal to the chiefs and elders to help the government rise up against the menace.

He disclosed that government will scale up its anti-galamsey operations in the area and rid the River Offin of all mining equipment particularly the Chan fa.

The Deputy Minister motioned an alternative and a more sustainable and responsible mining method as replacement for the destructive galamsey.

He announced that the MP for the area, Hon. Isaac Asiamah has secured a Community Concession for the area and that by the end of April, it will be operationalized and government will also provide the new gold catcher for a responsible and sustainable mining to take place.

He reminded the community and Ghanaians not to view the onslaught on illegal-small scale mining as an attack on their livelihoods but rather a measure to protect the country’s resources and grow the industry.

Hon. Duker, as part of his visit to the Ashanti Region, has inaugurated the Atwima Mponua District Mining Committee with a call on them to stamp out illegal mining in the area.

He told the members of the community to be vigilant and firm in dealing with mining issues in the district and deal decisively with any person or institution who flouts the rules governing mining in the country.

The Member of Parliament for Atwima Mponua, Hon. Isaac Asiamah commended the Sector Minister and the Ministry for taking steps to deal with issue.

He also joined the campaign against illegal mining, warning the residents that they risk drinking unsafe water if they don’t end galamsey activities.

He listed some development projects executed so far and appealed to the community to keep faith with government.

MIAA Breast: Campaign to empower men on how to press breast launched

DKM customers to get 100% payment latest next week

RB Leipzig given green light for 8,500 fans to return

Bawumia: Our growth depends on the private sector