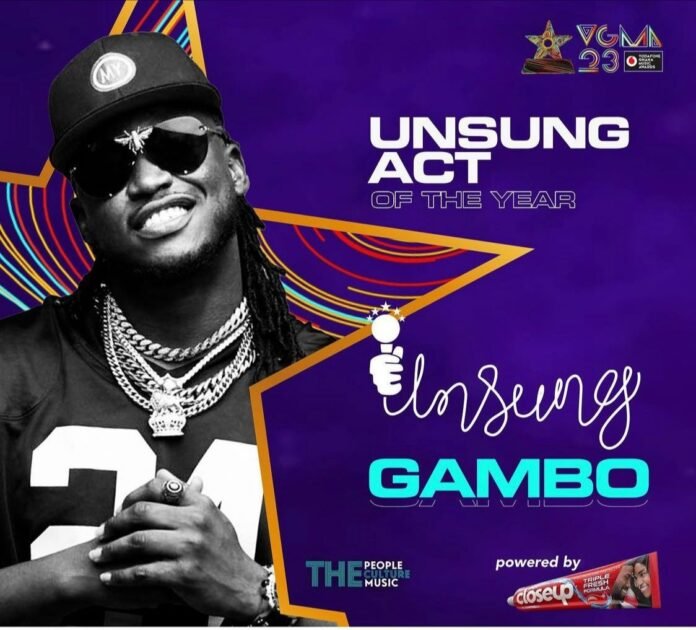 History has been made as the efforts of highly talented Ghanaian trap rapper, Gambo in promoting the beautiful side of Ghana to the rest of the world through his classic music videos begin to yield dividends.

The versatile musician, Gambo has won the Unsung Act of The Year for the 23rd edition of the Vodafone Ghana Music Awards (VGMA).

He beat competition from several other artistes, demonstrating his relevance in the Ghanaian music industry over a short period of time.

The controversial musician, Gambo has come to be loved for marketing the beautiful side of Ghana in music videos, always urging his fellow musicians to do good music videos, showcasing that life in Ghana is good.

VGMA is the biggest music awards platform in Ghana.

This year is Gambo’s first shot at VGMA and he has not disappointed his fans.

Gambo has since his emergence onto the Ghanaian music scene, resisted the temptation of using his talent to disrespect the media. He has actually built a healthy relationship with journalists across Ghana, drumming home the need for journalists and musicians to work together to better market Ghana to the rest of the world.

Working closely with over 200 media houses, among them being over 100 radio stations and 30 TV stations in Accra, kumasi, takoradi and Volta region, Gambo has built a solid brand and reputation for himself since first emerging on the Ghanaian music scene in 2020 with his hit single: ‘Kwacha’.

Gambo has always strived to showcase the positive side of Ghana in his music videos. He believes musicians in Ghana must invest heavily in producing quality and classic music videos and projecting Ghana as a land of opportunities.

Earlier in 2021 on the 28th of February Gambo released the official video for his single ‘Drip’ believed to be the number one most expensive music video for 2021.

Drip was one of the fine tunes off Gambo’s ‘New Era’ Extended Play.

Drip was Produced by fortune Dane Mixed by mike millz, and its video was shot
by skyface, Featuring Edem
Staring Moesha & shugatti and Dj Memsah. Drip’s video
was shot at a 5 start venue at the Kempinski Hotel and
Premiered at 4syte TV in Accra on Friday, February 26, 2021.

The premiere attracted several A-list artists, with live performances from Kechi and others. ‘Drip’ was the first song off Gambo’s Extended Play. The banger is available on all major streaming platforms including YouTube, Audiomack.

In October 2021, Gambo released a colorful video for his song: ‘We Move’.

The single ‘We Move’ had Gambo featuring musician Strongman.

‘We Move’ is one of the classic tunes off Gambo’s ‘New Era’ Extended Play.

For ‘We Move’ video, Gambo as usual did what he knows best, maintaining his record as the producer of quality music videos in Ghana.

Gambo, who prides himself as the best rapper in Ghana aside Sarkodie, closed the year 2021 with his hit song: Boys Aye Wild.

Gambo recruited the services of some of Ghana’s finest musicians on his New Era Extended Play.

The ‘New Era’ EP was launched on June 18, 2021 and saw Gambo featuring the likes of veteran rapper, Ayigbe Edem, Strongman, Medikal and Sefa.

Only one out of five tracks off the “New Era” EP is featureless. The EP is dominated by current trending stars in Ghana.

D-Black’s Black Avenue Muzik label signee, Sefa, who is currently dominating local charts with her latest hit single “E Choke” (which features Mr Drew) was the only female star recruited for the EP.

The ‘Beautiful’ song speaks about the heartbreak Gambo suffered in the hands of his ex-girlfriend.

In 2021, he continued his music tours, visiting Takoradi and seizing the opportunity to interact with journalists, fans and the parents of musician Castro.

He also attended a number of big musical concerts in 2021, performing alongside Shatta Wale at the Taabea Taacum concert held at the Heroes Park, Baba Yara Sports Stadium.

Gambo was unarguably the right artiste to win the VGMA Unsung Act of the Year.

His contributions so far in the Ghanaian music industry clearly show that he indeed deserves the VGMA Unsung Act of The Year Award.