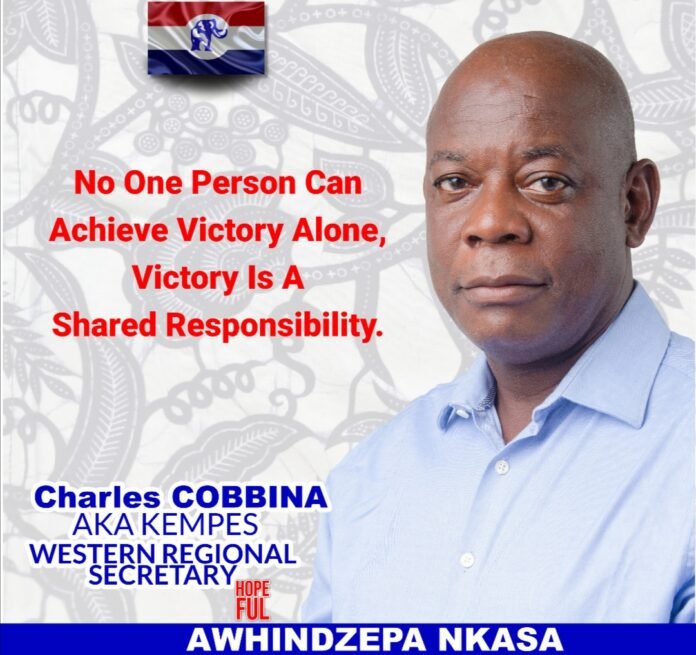 The Western Regional Secretary hopeful of the ruling New Patriotic Party (NPP), Charles Cobbina says he would not have been endorsed to contest the party’s election if he was not competent.

He stated that “I will not be endorsed if I was not the best”.

Mr. Cobbina dismissed claims that he is the chosen candidate of the Western Regional Minister, Kwabena Okyere Darko-Mensah as it is purported by some members of the public.

He said even if it was true as believed by some members, it meant that he was competent for the job since the Minister would not endorse an incompetent and inexperienced candidate to head such a position at this crucial time when the party aims at ‘breaking the 8’.

Mr. Cobbina noted that “Even if the Regional Minister is bringing a candidate, do you think he will bring “rubbish”, he is a fantastic man and he will not endorse you if you are not… I am a 2 star general in the party and they know my worth and how I work.”

Mr Cobbinah who is popularly known in public as Kempes made the remark when he appeared on Skyy Power FM’s Jolly Breakfast Show on Friday.

He contended that he is the rightful candidate to be elected for the Regional Secretary position of the NPP and that he is coming with a clean heart because he even prays for his competitors.

He stated that he was not the favourite because he has been endorsed by the Regional Minister, but because of his personality, calibre, attitude, presence and attitude of excellence which the party people know and the leaders will recommend at any time.

“I will not be endorsed if I was not the best”, he emphasized.

Mr Cobbinah divulged that he has a bigger connection worldwide than any of his competitors and for that matter, he will use that to gather more resources to help the party when he gets the nod as the Regional Secretary.

The NPP will conduct its Regional Elections from May 27 to May 29, 2022. Meanwhile, the NPP between April 28 and May 2, organised elections at the constituency level to elect officers to lead the party for the next four years.

Mr. Cobbina’s campaign manager who Themed his campaign AWHINDZEPA’ ‘NKASA has brought gusto and finesse in the campaign.

He and his team go on visitation draped in various colours of the cloth our mothers call Quality speaks for itself.

Fix our roads or else… – Sissala youth group warns gov’t

NPS 2019: Zoomlion and others key at National Policy Summit

Ayensuano residents advised not to build houses on waterways