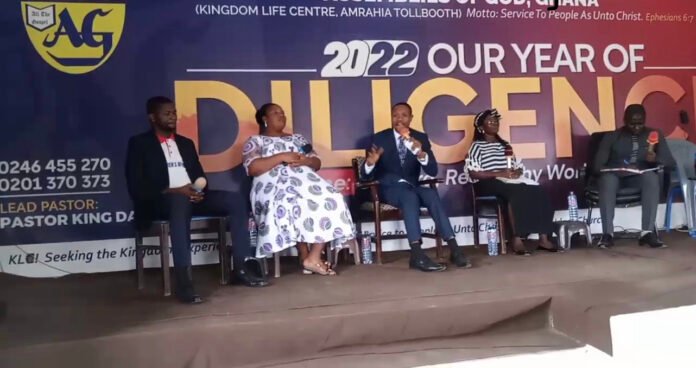 Parents, particularly Christians, have been advised to make a conscious effort to spend quality time with their children in order to fully understand their challenges and solve them. This came to light during a symposium to mark this year’s Children’s Service Day Celebration at the Kingdom Life Centre Assembly of God, Amrahia-Tollbooth.

The panel, consisting of a banker, educationist, social worker and a pastor, unanimously agreed that the industrial evolution and challenges of the 21st century had taken parents away from home, concentrating more on their jobs.

This leaves their children in the care of nannies and sometimes television and social media, thus exposing them to all kinds of social vices.

Mr Thomas Awemoni Vuguse, a banker and Branch Operations Manager at the First National Bank, admonished parents to see themselves as gardeners with their children as the garden and dedicate time to them.

He noted that raising a child is a full-time job that demands ‘pruning, fertilizing, weeding,’ among others. He stated that young people of today are susceptible to instant gratification with the desire to have everything in a short time, necessitating the need for parents to constantly manage such gratifications.

Mr Vuguse, who is also a human capital developer and a child evangelist, added that exposure to media content, mostly sexual, exposes kids to all kinds of indecent behaviours, making them susceptible to sexual exploitation by unscrupulous persons.

This, he said, requires conscious efforts by parents to understand such issues and deal with them promptly.

An educationist and a former patron of the Scripture Union at Ada Secondary Technical School, Mrs Irene Aryee-Otipeseku, admonished parents to be abreast of the changing spate of time in order to appreciate the challenges children are going through.

She said the 21st-century information age has come with skyrocketing changes in events. She added that resulting to the conventional means of raising children would, therefore, not be the best way manage such challenges.

READ MORE:  Churches In Accra Excluded From The Annual Ban On Drumming And Noise Making

Mrs Aryee-Otipeseku also admonished parents to be better role models for their children and not deliberately provoke them as such provocation could lead to the children shying away from them with their problems.

For her part, a social worker and Chief Executive Officer (CEO) of the Christ Home of Hope Destitute Children Home, MrsTheresa Kafui Avorgah, urged parents to deliberately study their children and understand their needs, aspirations and desires.

She said that is the only way by which parents can better help their children according to their respective needs. She stated that there is no one-fit-for-all strategy in parenting, necessitating the need to treat each child according to his/her abilities.

She added that the changing landscape of the family has brought several disadvantages to the raising of children, urging parents to resort to the bible and constantly pray for their children.

READ MORE:  CHRISTIAN PASTOR CLAIMS DEMOCRATS 'HAVE DEMONS IN THEM' AND ARE TRYING TO 'PLACE HEXES' ON TRUMP

Meanwhile, the head pastor of Kingdom Life Centre Assembly of God, Pastor King David Avorgbedor, urged parents to be abreast of the word of God and instil moral values in their wards.

He also urged parents to admit that the changing evolution of the time comes with its own challenges for children and make time to address such challenges.

He advised parents to practice proper time management and spend quality time with their family members.

The symposium was held on the theme “The challenges in 21st century (today’s) parenting and the way forward.” It was used as an avenue to highlight the challenges associated with parenting in today’s world.

The discussion focused on the everyday challenges faced by the 21st-century child and the parent; the major and minor causes of these challenges and how such challenges could be overcome by parents. It also looked at the practical things Christian parentsand children could do, collectively, when faced with such challenges.

How Eddie Murphy broke a family rule so daughter Bella could...

“The person to break my records isn’t there yet” – Usain...