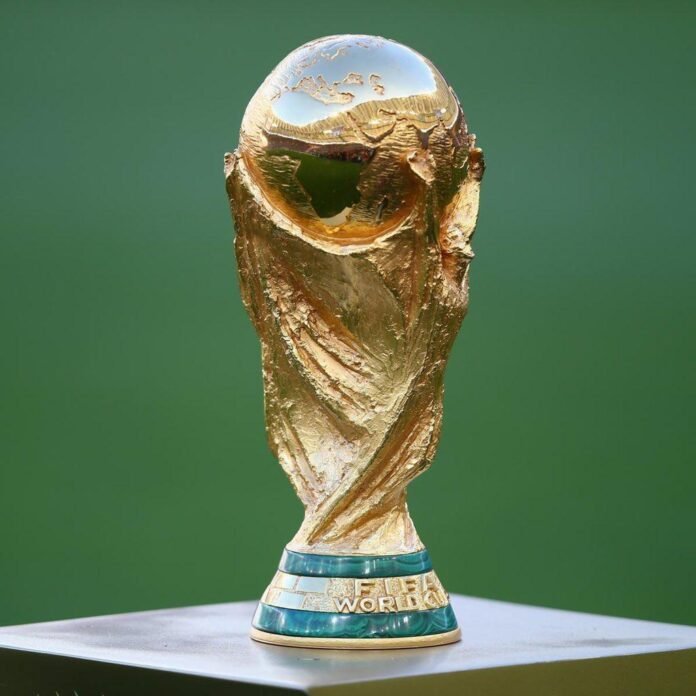 The current FIFA World Cup trophy was designed by Italian sculpture Silvio Gazzaniga after the original trophy (Jules Rimet trophy) was awarded to Brazil permanently in 1970.

After Brazil had become the first nation to win the trophy on three occasions, they were awarded with the trophy permanently after 1970 World Cup in Mexico.

The current trophy weighs 6.175kg and measures 36.8cm in height and 12.5cm wide and contains 4,927 grams of pure gold will be heading to Ghana this weekend as part of the exhibition of the trophy per the custom of the world football governing body to offer all the 32 qualified nations the chance to see football’s biggest prize and offer an extraordinary opportunity for people to take in a piece of football history and share their passion for the sport with each other.

However, the trophy has been a subject of series of theft with the first one occuring in England prior to the 1966 FIFA World Cup to be hosted by England.

Unlike presently, the trophy in the past was only sent to the host country for exhibition before the scheduled World Cup tournament kick-starts.

READ MORE:  Gyan’s contract with us is performance-based – Legon Cities

It is in this regard that in 1966 when England was to host the World Cup, the trophy was thus sent to London for exhibition and the craziest thing to have thought of, is stealing of the football’s biggest prize in a broad daylight. But don’t get it twisted, that is exactly what happened at the exhibition center.

The English Football Association (The FA) had received the trophy in January 1966 for exhibition for the scheduled World Cup in July. The trophy was usually kept in their headquarters at Lancaster Gate but brought out for public display and exhibition at Westminster Central Hall.

The exhibition was officially opened on 19th March 1966 as the World Cup was a major side attraction. On the 20th of March after just a day of exhibition someone forced open the display case in which the trophy was kept, and stole the trophy at the blind side of the security guards.

Two uniformed officers reinforced by two plainclothes officers were those hired to guard the trophy and none of them saw or heard of any suspicion. They searched for the trophy the whole day but to no avail. The story went public and viral across the world the next day that the FIFA World Cup has been stolen in a broad day light robbery at an exhibition.

On 27th March, one David Corbett and his dog known as ‘Pickles’ were walking in the Deulah Hill District of South-East London when Pickles began to sniff at a parcel that was lying under the hedge of Corbett’s house, wrapped in an old newspaper and tied with a string. When he opened the parcel, he recognized the trophy and handed it over to the Police.

The Police however suspected that Corbett was involved in the theft but was freed upon interrogations.

Pickles briefly became a celebrity and a national hero, appeared on TV and in some movies. David Corbett together with his dog Pickles were given free tickets to watch the World Cup games .

When England won the World Cup after beating Germany in the final, Pickles and the owner Corbett were invited to the celebration banquet as a reward and later received rewards totaling £6,000. The FA made a replica of the trophy for the celebration.

Four years later in 1970, Brazil won their 3rd FIFA World Cup title in Mexico and the trophy was awarded to them permanently for keeps for being the first nation to win the trophy 3 times. However, the trophy didn’t get a happy ending as it was stolen again for the second time and this time from the headquarters of the Brazilian Football Confederation (CBF) in Rio de Janeiro in 1983 and has since then never been recovered again.

A replica of the trophy was presented to the Brazilian Football Confederation in 1984.

The FIFA World Cup trophy was originally called ‘Victory’ before it was later changed to Jules Rimet trophy in honour of the third and the longest serving FIFA President, Jules Rimet who initiated the World Cup and was in office as the FIFA President for 33 years, from 1921 to 1954.

GIVING ATTENTION TO WOMEN AND LESSER-KNOWN SPORTS, THE WAY TO GO

New Video alleges that a policeman Shot the Driver at Ayeduase

Meet the Ghanaian Harvard-trained plastic surgeon whose brother is also a...

COVID-19: We’ve not approved any Rapid Diagnostic Test kit yet –...