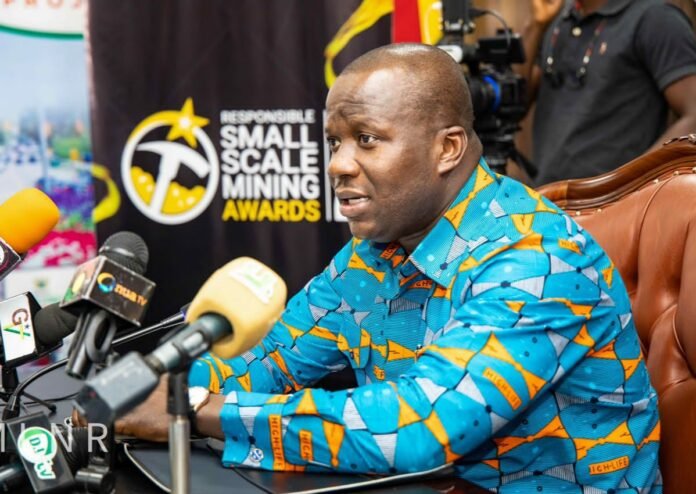 Launching the 2022 edition of the Responsible Small-scale mining awards on Friday, 9th September, 2022, Hon. Samuel A. Jinapor, the Minister for Lands and Natural Resources disclosed that the initiative is an effort of government and the Ministry to sanitize the mining industry and make it more attractive while urging all stakeholders to work closely together and help promote the mining industry in Ghana.

He explained the rationale for the awards scheme saying “while clamping down illegal mining, there is the need for a conscious effort to also promote legal and responsible small scale mining. This is the rationale behind the Responsible Small Scale Mining Awards” .

He said contrary to suggestions from critics that the President Akufo-Addo administration is against small-scale mining, the government recognizes small-scale mining as key component of the country’s mining regime and is determined to sanitize it.

He noted that although the sector has been bedeviled with many practices that are unacceptable with consequences of adverse impact on the country’s riverbodies, landscape and forestcover, it is also an important sector that contributes up to 40% of the country’s gold output and therefore government is very mindful of the sector, ensuring that it is well managed.

He also recounted a number of efforts that have been put in place to curb the menace, saying “some of these measures include the national and regional dialogue, operation Halt, the reformative efforts we are making through community mining, the mercury-free Gold processing machine we procured and the National Aternative livelihood programme we’ve rolled out”.

The Minister however pointed out strongly that inspite of all these measures, the Ministry has deemed it necessary to also reward and promote responsible small scale miners and recognise them to also serve as a meaures to curb the menace and to confirm government’s resolve of not being against small-scale mining but rather committed to sanitizing and inproving the industry.

“I would like to reiterate that the President and the Ministry of Lands and Natural Resources is not against small scale mining but is absolutely committed and determined to continue with efforts to sanitize the small scale mining industry in Ghana”.

He appealed for the support of government and the Ministry to fight illegal small scale mining on the Birim River which he said is a project they have taken upon themselves as an Association.

The National Small-Scale Mining Awards is a brainchild of the Ministry of Lands and Natural Resources which seeks to celebrate those who adhere to the health, safety and environmental standards guiding their mining operations.

Transport fares to go up 30% on Friday

GFA requests the immediate release of Kudus from Ajax

WAFU U-17: Black Starlets crash out after defeat to Cote D’Ivoire

Mahama will destroy Free SHS like he did to NHIS –...

Arrest Badu Kobi for his ‘Uninformed and Unguarded’ Comments – NPP...