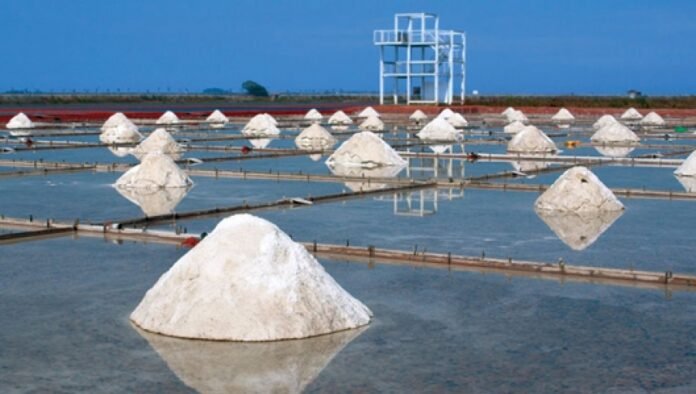 As part of efforts to make Ghana the leading producer of salt in West Africa, the Chairman of the McDan Group of Companies, Dr. Daniel McKorley, has disclosed that the ongoing project by Electrochem Ghana Limited to develop the Ada Songor Lagoon and concession has, so far, resulted in the first export of the commodity to Cameroon and Spain.

He said last year, for the first time, Electrochem was able to export salt, adding “it was just what we call a trial export to be able to prove that Ghana is capable of exporting salt”.

“Indeed, it was a frustrated process. It took zoom calls upon zoom calls…They (Tema Port) said it will take six months for us to do it. It took us days to make the export process feasible. There was a client team from Spain, who is buyer of companies from all over the world, who heard that Electrochem has come. We have started producing, just after rehabilitating the concession. So we were responsive, and arrangements were made, where we focused on getting close to 800cubes of salt to the Tema Port,” he revealed.

Mr Mckorley made this disclosure over the weekend after a tour of the 41,000-acre Electrochem concession at Ada by members of the media.

Electrochem Ghana Limited, which was granted a 15-year mining lease by Parliament in October 2020 to explore the salt resource in the Songor Lagoon and surrounding communities, has also projected to produce two million metric tonnes of salt a year in the long term.

He pointed out that for the first time in 52 years, fresh sea water, also known as brine, is flowing into the Songor Lagoon for the making of quality salt, thanks to Electrochem Ghana.

“Until now, the lagoon was heavily silted and was at the verge of extinction. About 18months, we arrived here, old pans have been rehabilitated and new standard ones built to help in the production of high quality salt for both the local and export markets. We met old pan station, which was 180m per second, and we revamped to get a 4300metres per second. 11 pans built during our first year, to 21 pans currently achieved based on local expertise/engineers,” he disclosed.

While expressing gratitude to the chiefs and people of Ada for supporting the project, Mr McKorley further gave an assurance that all communities located around the lagoon benefit from the construction of the pans.

Ghana imported over 600,000 tonnes of high-quality industrial salt last year, and Mr McKorley said Electrochem was hoping to capitalise on local demand for the product, as well as the demand in Africa and the global space.

“We have taken over a failed operation; it was technically insolvent. It didn’t have enough money to pay itself. Electrochem have constructed a carnal that connected the lagoon with the sea and channelled water back into the lagoon for the first time in about 52years to restore it to its natural ecological state to serve as a store house of sea water for commercial salt making,” Mr McKorley told the Daily Statesman.

“In West Africa, only Ghana and Senegal can produce salt, and Senegal doesn’t produce the high-quality sea salt that we produce here. They produce rock salt. In terms of demand (for salt), Ghana imported 650,000 tonnes of high-quality salt last year for industry use mainly, and so we are looking at attacking that market,” he stressed.

“Nigeria imported over a million tonnes of salt from Brazil. We are looking at attacking that market, and we have already had a lot of interest from Nigeria. Our main target is international companies that are procuring top quality salt that has a premium. We think some of the customers in Ghana and Nigeria won’t need the top-quality salt, but there’s a huge market for that,” he stated.

He said the company had braced itself for a few difficult years but it was hopeful of recouping its investment and becoming profitable before the end of its 15-year lease. “The project will inure to the benefit of the people more; our Corporate Social Responsibility (CSR) footprints here at Ada are already evident, but the journey has just begun,” he emphasised.

The Queen of the royal Adibiawe clan of Ada and CSR Director for Electrochem Ghana, Naana Adiki Manyeyo Adi I, noted that Ada would have made much more progress if social development-inclined firms like Electrochem Ghana had arrived earlier.

She also urged members of communities located around the lagoon who may still have some concerns to use dialogue to resolve those issues because the success of the mine would bring development to the area.

Majority: 2023 Budget to be presented within stipulated time frame

Period cramps 101: Why menstrual cramps happen, and how to relieve...

Lionel Messi ‘tired of always being the problem’ at Barcelona