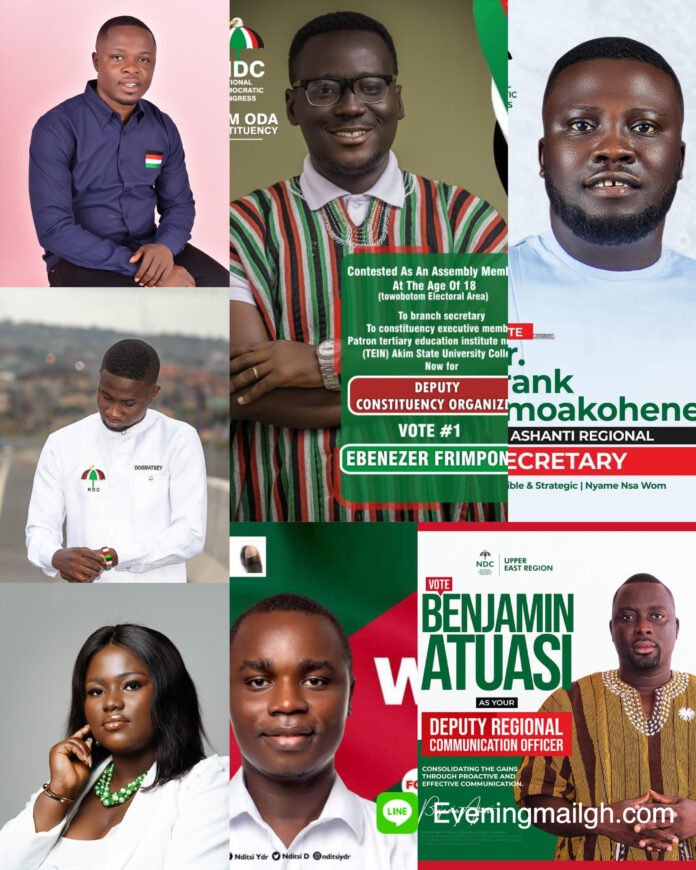 The opposition National Democratic Congress will from tomorrow, October 21, 2022, begin the election of its constituency, regional and national officers. In view of this, some past and present student activists have thrown their weight into the game, hoping to occupy positions in the party at various levels.

Speaking to the Daily Statesman, some of the students noted that the time had come for the NDC to break the tag that it does not appeal to the educated class, hence the decision to contest.

“This is a party that has learned professors all over, yet some people still think we do not appeal to the educated class. The many students contesting in this year’s election indicates that that tag has always been a fallacy and a creation of detractors of the NDC,” Dr Frank Amoakoahene, a medical practitioner and aspiring Ashanti Regional Secretary of the NDC, told this paper.

Dr Amoakohene, who is a former president of the National Union of Ghana Students (NUGS) and the National Health Students Association of Ghana (NAHSAG), indicated that he decided to contest the Ashanti Regional Secretary position to break the monopoly of the governing New Patriotic Party (NPP) in the region.

In 2020, Dr Amoakohene was the NDC’s candidate in the Asante Mampong constituency. He noted that the experience gathered over the years from his students’ activism and the 2020 general election, among other strategies, are what he intends to bring on board to break the NPP monopoly in the region.

For his part, Emmanuel Yaw Dogbatsey, an aspiring Other Youth Representative in the Anyaa Sowutuom constituency, has promised to bring the experience gathered from the students front to bear to help the party in the constituency.

Dogbatsey served as the chairperson for various vetting committees, both at the Students Representative Council (SRC) and departmental levels, at the University of Professional Studies, Accra (UPSA). He was also instrumental in the reinstatement of the UPSA SRC, when students’ voice had been ignored on the campus due to some legal issues. He is also a former financial controller of NUGS-National, and served as the Constitutional Review Committee chairperson for the UPSA-SRC and the Association of Business Administration Students during the 2016/2017 academic year.

READ MORE:  82 financial institutions collapsed under Mahama with no payments to affected customers

He is currently the President of Idea Factor National, an organization geared towards the development of youths in the area of Leadership and Entrepreneurship. As President of Idea Factor, he organized an entrepreneurial campus tour with Dr. Paa Kwesi Nduom on five campuses, including Mountcrest University, UPSA, Zenith College, Datalink and Methodist University College. He believes he has exceptional organisational skills that would help the opposition party in the 2024 general election.

Mr Dogbatsey holds an MBA in Corporate Governance from UPSA and is an Associate member of the Institute of Directors Ghana. He is currently reading Law at the same institution.

Wonder Tortor is also aspiring to become the organizer of the Bortianor Ngleshie Amanfro constituency. He is a former Central Regional President of the National Service Personnel Association (NASPA). He also served as the SRC Financial Secretary at the University of Education Winneba (UEW) and the General Secretary of the Tertiary Institution Network (TEIN) of the NDC in the same university. He is also a former NASPA President at the Cape Coast Metropolitan Assembly.

Speaking to the Daily Statesman, he said he is seeking to change the face of political mobilisation in the constituency, assuring that he shall not disappoint the party members when given the nod.

For her part, a former SRC Sports and Games Financial Secretary of UEW, Kumasi Campus, Beatrice Tagborloh, has indicated that she joined the NDC race to encourage young women in the party not to lose focus, but be committed to the ideals of the party.

Ms Tagborloh is contesting the Women Organiser position at Kwadaso in the Ashanti Region. Speaking to the Daily Statesman, she indicated that “there is apparent economic challenges which has the potential to weaken women who are believed to be most vulnerable,” hence her decision to contest, and give them hope.

She served in different capacities in TEIN NDC, University Students Association of Ghana (USAG) and NUGS.

According to Ms Tagborloh, her agenda at the women’s wing is aimed at minimizing the effects of economic challenges on women. To this end, she proposes to find resources to provide soft loans for women, especially hawkers, to give them the needed boost to take care of themselves and their families. She also wishes to introduce skills and entrepreneurship training programmes to educate the people, especially the youth, on business skills, and aid them in establishing their businesses.

Additionally, she intends to institute an annual dinner party for women and an awards ceremony to reward hardworking women in her constituency, among other life-changing policies.

She encouraged women in the Kwadaso constituency of the NDC not to lose hope but to keep faith in her.

“I am here to support and push our party’s agenda through the effort of every woman and to support ourselves for the betterment of the party.  Together, we will build a solid women’s wing for the party to win power in 2024, and support the party to bring development to all and sundry.  We are revolutionizing women enthusiasm and energy for the party,” she said.

On his part, a student leader at the Akim State University College, Ebenezer Frimpong, has promised to change the face of party mobilisation in the Eastern Region, regarded as stronghold of the governing NPP.

Mr Frimpong is contesting the Deputy Organiser position in the Akyem Oda constituency. According to him, his several years of experience as a practicing journalist in the area has positioned him as the best candidate for the position. Though himself a student, he doubles as a patron of TEIN NDC in the school.

He told the Daily Statesman that he had always had the desire to serve, adding “that is why as young as 18 years, I offered to contest the Assembly Member position at Towobotom Electoral Area,” an area considered hostile to members of the NDC. He is also a former branch secretary of the party, and currently serves as a constituency executive member of the NDC. 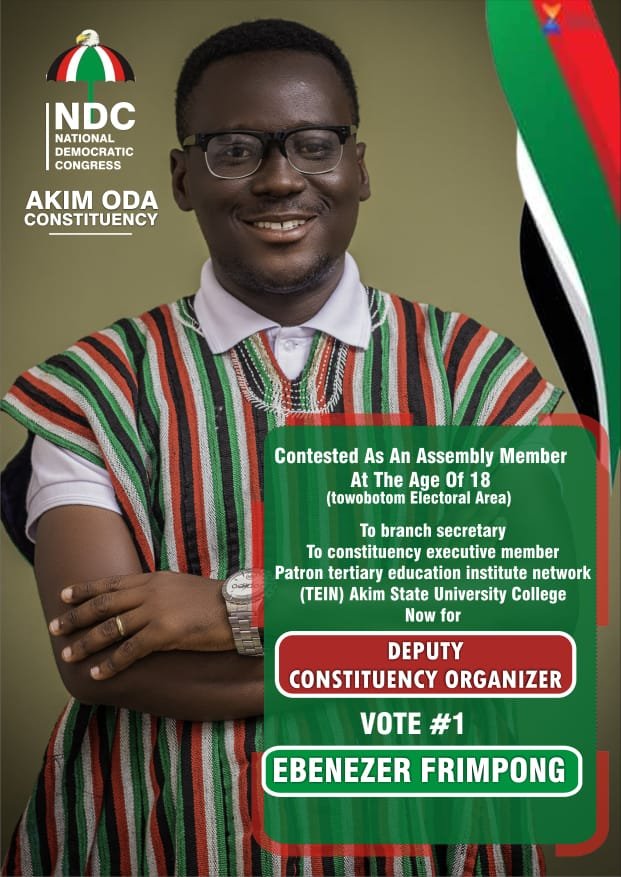 Atuasi Benjamin, a former Junior Common Room Council (JCRC) President of the Ajumako Hall of UEW, has promised to consolidate the gains of the NDC in the Upper East Region.

He is contesting as the Deputy Regional Communications Officer of the party. He said he is committed to assisting the regional communication office and the Executive Committee to “implement pragmatic ideas to garner more votes for the victory of the NDC in 2024 and to maintain same beyond.”

“I come to this contest with lots of experience gathered over the years from serving the party in several capacities at the branch level to the constituency. With my experience, coupled with my professional knowledge and expertise in communication and with your endorsement, we shall rescue the good people of Ghana from the current excruciating economic hardship,” he assured the NDC delegates. 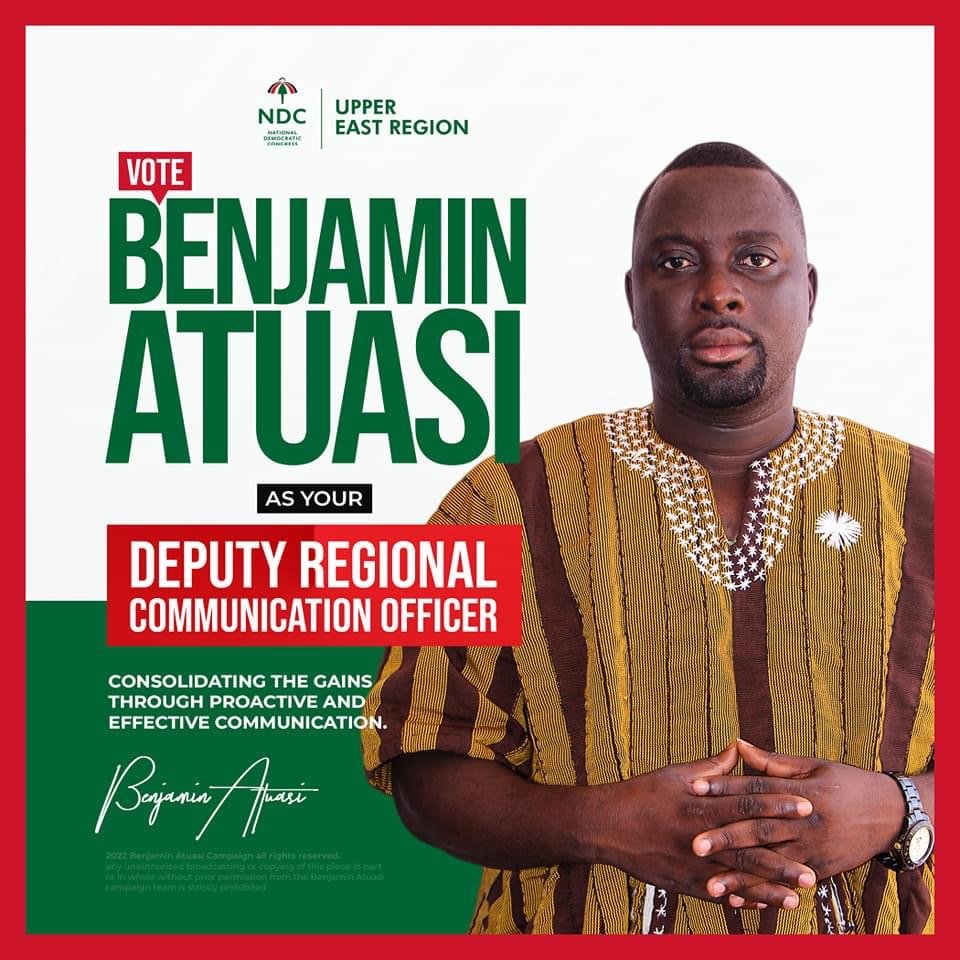 Wonder Nditsi, a former executive of the Ghana Union of Professional Students (GUPS), has promised to focus on the welfare of the members of the NDC when given the nod.

Wonder is contesting as the Volta Regional Treasurer of the party. His motto is ‘Hope, Integrity, Dynamism’. According to him, his main aim for the role is ‘Accountability to the Grassroots’. In a social media post, he indicated that he is committed to welfare of the members, business development and sustainable funding of the NDC. 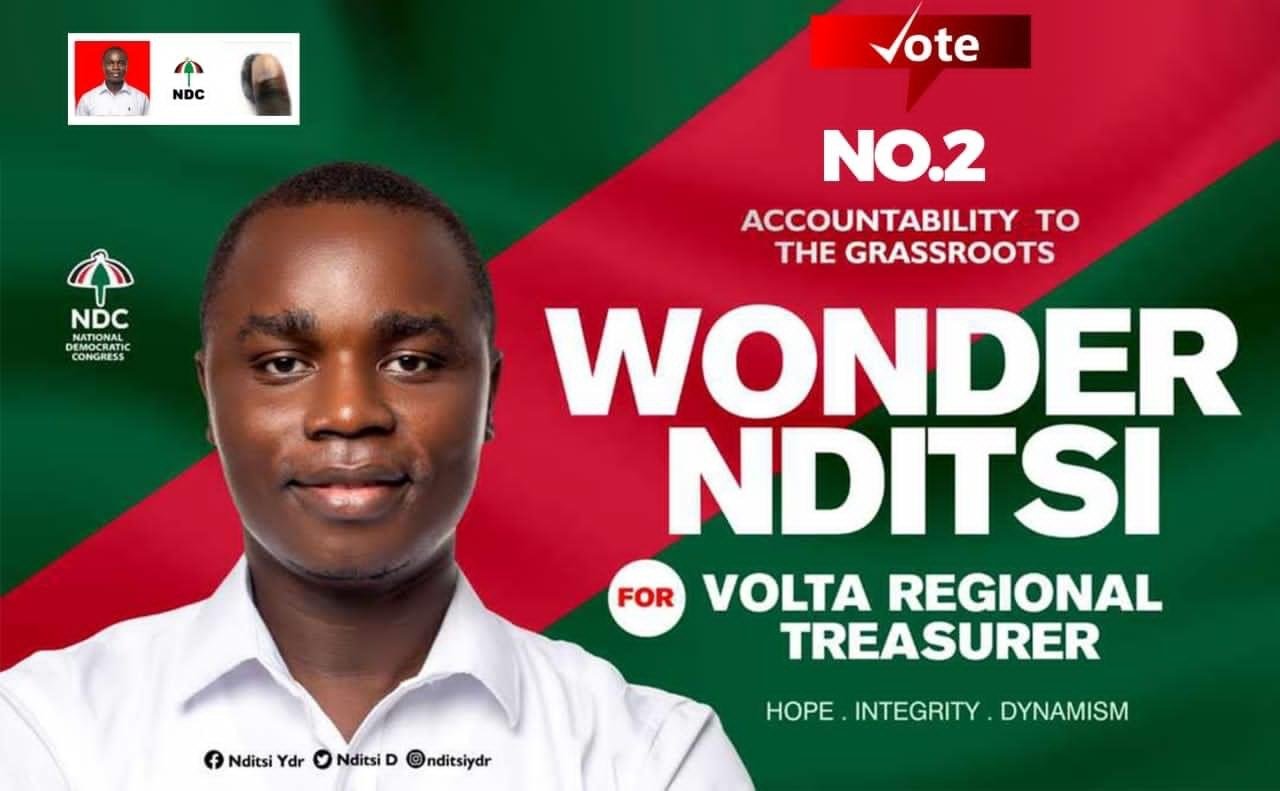 The NDC will hold its constituency elections between October 22 and 23, 2022, while the regional elections would be held between November 12 and 13, 2022. The National Congress will be held on December 17, 2022.

Double Track Teachers ‘Angry’ at Gov’t over 7 Months Work Without...