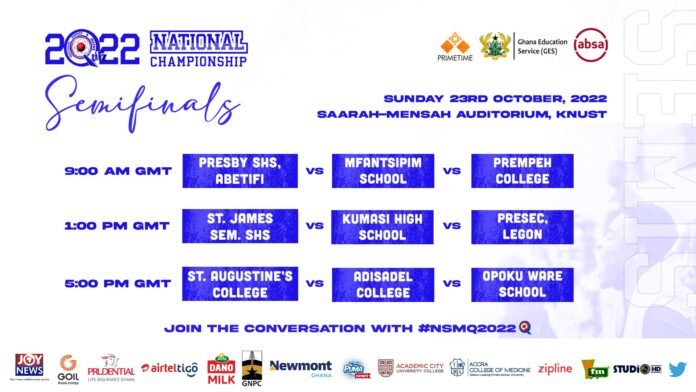 Tomorrow, Sunday, October 23 would produce one of the fiercest contest to be witnessed in this year’s National Science and Maths Quiz as two schools from Cape Coast, St. Augustine’s College and Adisadel College come face to face with Kumasi based Opoku Ware School.

The contest, dubbed final before final, is scheduled to begin at 5:00pm.

Meanwhile, Mfantsipim School will also face Prempeh College on the same day in a game that also involves Abetifi PRESEC, regarded the underdogs of the day.

That game which is the first contest of the day will begin at 9:00am.

But for the surprises in recent years, Presby Boys Secondary School, PRESEC Legon, would have had a walk in the park contest as they come up against St. James Sem School and Kumasi High School. However, the recent surprises make that game a contest to look at for and it is the second game of the day.

READ MORE:  Akufo-Addo invites the "undisputed kings of the competition" to the Jubilee house

Tomorrow’s contests determines whether there would be an all Kumasi final,all boys final or otherwise.

Cecilia Dapaah: Rural areas to have access to water through polytanks

Domestic Flights To Begin Operations From May 1