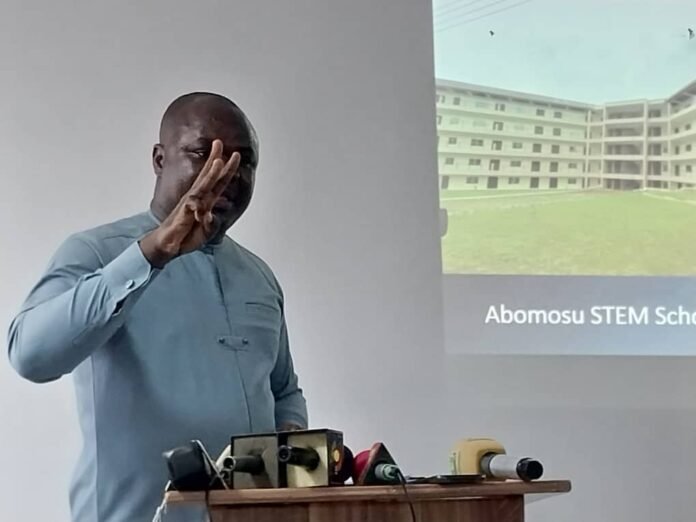 The Eastern Regional Communications Director of the governing New Patriotic Party (NPP), Evans Osei Yeboah, has stated that the NPP has invested massively in terms of infrastructural projects more than any government since independence in the region.

Addressing a press conference yesterday, he gave account of themany infrastructure projects the government had executed in the region.

Mr Osei Yeboah explained that the account is limited to projects executed in the area of education, factories, health, sports and roads between 2017 and 2021.

He said from “the official records, we can boast of 305 infrastructure projects in various Senior High Schools, 33 initiated 1D1F factories and 17 completed and operational in the region.”

The rest are 17 new hospitals/health facilities ongoing in the region, two multi-purpose mini stadia and 13 Astro turf pitches, and 1,487.62Km of roads construction.

On education, he said the government had undertaken hundreds of infrastructure projects encompassing classroom blocks, dormitory blocs, ICT facilities etc at all levels across the region.

At the Senior High level, he pointed out, the government, through three major infrastructure development initiatives, has constructed a total of 305 projects in the region.

Under health, he mentioned the Eastern Regional Hospital, explaining that Phase I of the construction of a 285-bed facility, out of the total capacity of 600 beds, is under construction and steadily progressing.

Once fully completed, he said, it will be fitted with the requisite teaching and learning facilities. He assured that Phase 1 is expected to be completed very soon and commissioned.

“In April, 2020, Parliament approved a loan facility of 79 million Euros for the construction of some 11 40-bed hospitals and one polyclinic. Out of the 11 hospitals, Eastern region had five that are being constructed at Jumapo, Kwabeng, Nkwatia, Adukrom, and Achiase,” he stated.

According to him, in total, 1,487.62Km of roads, comprising urban, feeder, and highway roads, are either completed or ongoing, as well as nine major bridges across the region.

Rawlings rejects Akufo-Addo’s decision to rename UDS after him

The 10 things you should know about your vagina