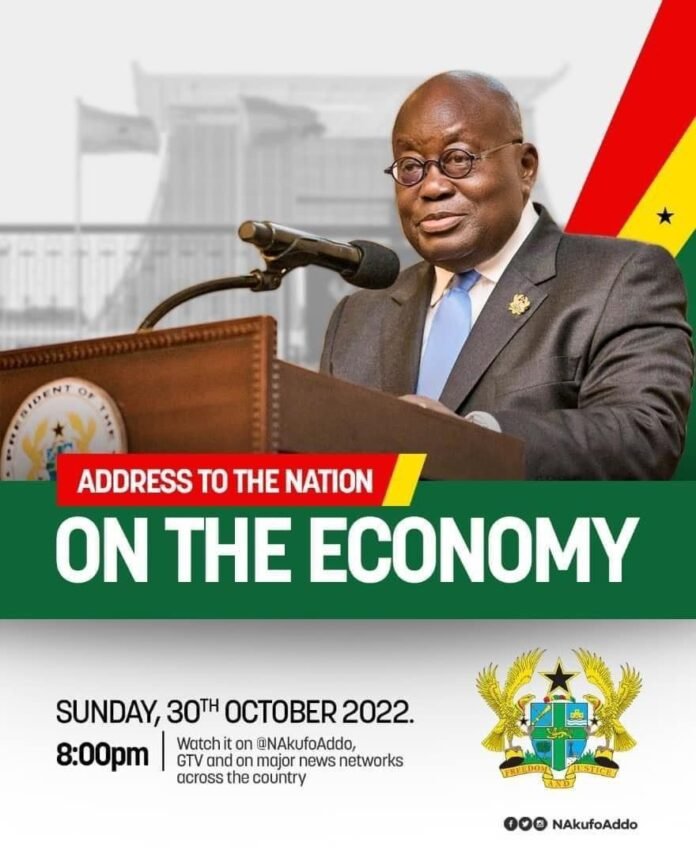 President Nana Addo Dankwa Akufo-Addo would Sunday, October 30, 2022 address the nation on the state of the economy. He would use the address to outline measures taken by his government to save the country’s collapsing economy.

The address follows a series of meetings held between the President and stakeholders this week.

Early this week, the President met with the Association of Ghana Industries (AGI) and the Economic Management Team. The Bank of Ghana also held meetings with commercial banks and operators of forex bureaus in the country.

Additionally, the president met a section of the majority members of Parliament who have called for the dismissal of Finance Minister, Ken Ofori-Atta.

I will be addressing the nation on the economy on Sunday, 30th October, 2022 at 8pm. Watch it live on @NAkufoAddo, GTV and all major news networks across the country. #BouncingBackTogether pic.twitter.com/W8uclgaQbf

The two addresses are coming at a time both majority and minority Members of Parliament are calling for the dismissal of the Finance Minister, Ken Ofori-Atta.

Otumfuo and NLA Collaborate to Raise Funds to Support Development of...

What We Speak; What We Hear

Man who lost his eye during ‘Let my vote count’ demo...

Mass testing not panacea to COVID-19: Education Ministry to Ablakwa