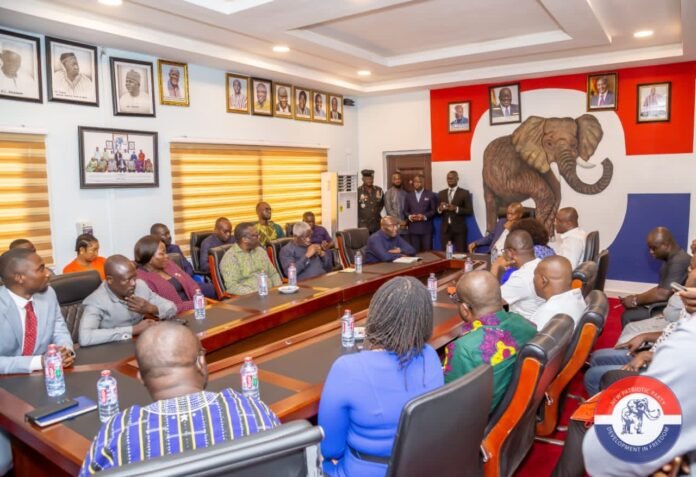 Vice-President Mahamdu Bawumia has pledged his commitment to embark on a fundraising effort to support the party’s plan of registering all members to help with its data and membership analysis.

His support is particularly targeted at polling station executives, electoral area coordinators, constituency executives, regional executives and members of the national executive committee, as way of appreciating their sacrifices for the party.

The Vice-President made the pledge when he paid a working visit to the headquarters of the governing New Patriotic Party (NPP) last week.

Dr Bawumia expressed appreciation to the national officers of the party for the cordial reception accorded him, and congratulated them on their respective electoral victories during the National Delegates Conference.

He said the party-government engagements will help close the gap at all levels of the party.

He stressed the need for a standing platform aimed at synergising government and party activities to facilitate victory in 2024 general elections.

He noted that lack of such synergy could be the reason for the party’s inability to sustain the huge gap between it and the opposition National Democratic Congress in the 2020 presidential and parliamentary elections.

He stressed that reigniting that relationship is therefore imperative in developing healthy party-government engagements.

He outlined some of the major policies he spearheaded, such as the implementation of the government’s digitalisation agenda. He also cited the Sino-hydro deal which had led to the actualization of face-lifts of roads and interchanges; paperless ports; the enhanced mobile money interoperability; ‘one constituency one ambulance’, among others.

Dr. Bawumia also pledged government’s commitment to addressing the prevailing economic conditions in the country, assuring that mitigation measures were being put in place to relief citizens.

The National Chairman, Stephen Ayesu Ntim, praised the Vice-President for his visit, and urged him to continuously support party activities. He assured him of the party’s unalloyed support to government to ensure the success of its programmes.

He reiterated that the initiative of holding regular party-government meetings will be replicated across the country, particularly in the regional capitals.

The overall objective, he said, is to provide a platform for government appointees, particularly Ministers of State and CEOs, to interact with party officers and the grassroots at all levels.

According to him, it is in the party’s interest to sustain such a programme in helping unite and mobilise its rank and file for a third consecutive electoral victory in 2024.